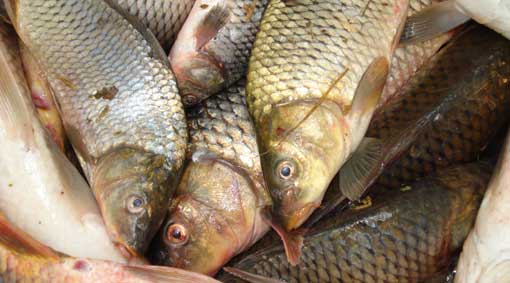 Rivers of Carbon is a project working not only on riverbanks, but also instream.  As a partner in the Upper Murrumbidgee Demonstration Reach we are supporting efforts to understand more about carp behaviour and optimal management measures.  31 tagged carp have been released into the upper Murrumbidgee River at Scottsdale (near Bredbo) and Murrells Crossing (downstream of Cooma).   The tagged carp are marked with a long yellow tag near their dorsal fin (see above).  These carp are implanted with electronic tags so their movements can be tracked to tell us how carp move up and down the river system.

We are asking recreational fishers to please RELEASE tagged fish if caught and report details to Bush Heritage Australia.  A reward will be given for making a report.  Please take photos if possible.

This work is part of the broader Carp Research Project being run by the UMDR.

The UMDR Carp Reduction Strategy identifies carp as a key management issue for implementing recovery of native fish populations in the upper Murrumbidgee.  Carp are recognised as one of Australia’s worst aquatic pest species.

In our region we know little about the carp lifecycle and where they breed, yet this information is vital to better manage the impact of carp on native fish and river ecosystems.  In lowland regions, carp research has shown that carp breeding is concentrated in large, shallow wetland areas from which lowland river systems are populated.  However, in upland river systems such as ours there is an absence of large, river-connected breeding areas, yet carp are still prevailing throughout the system. There is anecdotal evidence that suggest that carp may actually be breeding in riverine systems of the upper Murrumbidgee.

What is the UMDR Carp Research Project?

The UMDR Carp Research Project is a multi-year, collaborative research project that has three parts: