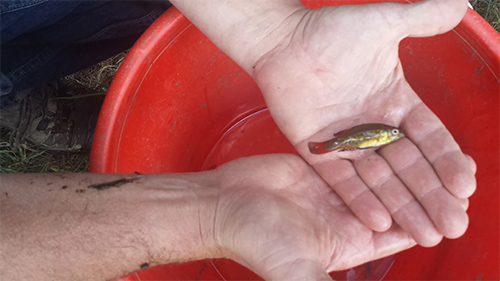 Luke Pearce from Fisheries NSW got in touch with Lori to report that recent sampling in Pudman Creek has found that the stocked population of the threatened Southern Pygmy Perch are doing well and breeding. The survey captured several juvenile fish which is a clear indication that the fish have successfully bred in Pudman Creek last spring.

Lori was so excited about this news she rang me immediately and we had an animated conversation about fish breeding while I was standing in the breakfast cereal aisle at the supermarket!

We are thrilled with this news as the Pudman Creek is part of our Rivers of Carbon project and we recently spent a morning on the Creek talking to a landholder keen to do more fencing and replanting – great news for the Southern Pygmy Perch!