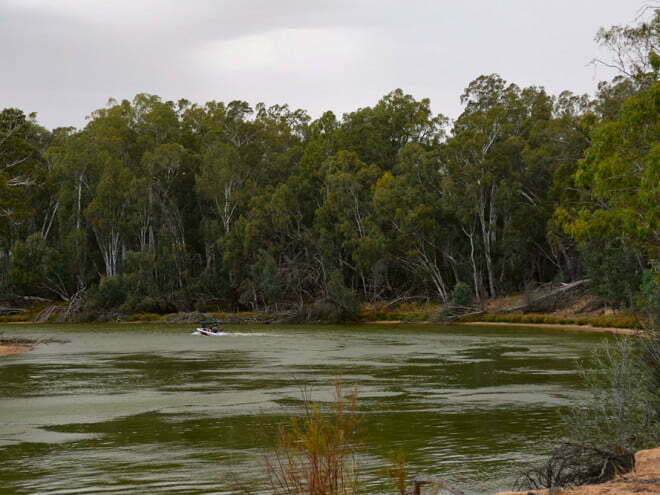 Are algal blooms the new norm for Australia’s major rivers?

Are toxic algal blooms the new norm for Australian rivers? Are we really ready for them to be recurrent on the Murray River? More importantly, what do these frequent blooms say about how we manage water in Australia, especially as we start to see the impacts of climate change on our environment?

For much of this year, up to 1700 km of the Murray River has been hit by a serious outbreak of blue-green algae. With the arrival of wet weather, the river is now recovering, but it is likely that these poisonous microbes will return. This is problematic because these algal blooms come at significant environmental and economic cost. For example, drinking water has had to be specially treated to remove potential toxins, farmers have had to get drinking water for their livestock from elsewhere, and regional tourism has been impacted.

In the past decade we have seen three other, similar blooms in the Murray River: in 2007, 2009 and 2010. These algal blooms all occurred during a period of drought. This means that they are likely to have been caused by a combination of weather as well as the way that we manage water, particularly during periods of water scarcity.

These three blooms started in Lake Hume, a large reservoir in the Murray River’s upper reaches, created to help to ‘drought-proof’ Australia. All of these blooms began after the water level dropped below 10% of the lake’s capacity. At these low levels, disturbances such as transferring water between the Snowy and Murray river systems can easily lead to the mixing of warm surface waters with nutrient-rich water at the bottom of the reservoir. This creates an ideal environment for algal blooms – the warmth ideal for bloom formation, and the nutrient-rich water ideal for feeding the bloom. These blooms were then released into the Murray River by managed water releases from Lake Hume. These circumstances indicate how we must consider the way that we manage water and the impacts that the systems in place can have.

However, this does not seem to have been the only contributing factor in this year’s algal bloom. The main blue-green alga in the current outbreak has previously been reported in very low numbers in the river, and has previously never formed a bloom in the Murray River since 1978. Crucially, this species flourishes in very warm temperatures. overseas blooms of this species have occurred when water temperatures reach 26oC.

This seems to indicate that the climate had a significant impact on this year’s algal bloom. Both the maximum and minimum temperatures were consistently above the long-term average during the past few months, as was the amount of sunlight reaching the surface of Lake Hume. If this bloom was indeed a result of unusually warm temperatures, it is very likely that we will see more blooms of this type in the future.

What is most concerning about this year’s outbreak is that such significant environmental events are seemingly seen as the new normal. 1991 was the first time that an algal bloom in an inland waterway had been reported in Australia. In response, a state of emergency was declared and there was significant investment by state and federal governments into freshwater research, particularly in the Murray-Darling Basin. However, none of the algal blooms on the Murray River in the past decade have had the same response. Although there has been some press attention, there is not the same call to arms that we saw in 1991. Yet given that these events have the potential for such significant impact, why is there apparent complacency? It is vital that there is awareness about events such as these, and the steps are taken to attempt to prevent their re-occurrence into the future.

Featured image and article adapted from CSIRO ECOS Magazine Edition Issue 219, May 2016, read this article here Are toxic algal blooms the new normal for Australia’s major rivers? by Darren Baldwin.    The original story shared through ECOS Magazine appeared in The Conversation and you can read it here.