We hear a lot about carp, but what about redfin, and the impact that it is having on our native species? In the past week we came across a new study on juvenile Redfin diet that ties in nicely with our latest story on stopping alien fish in their tracks with tons of rock! 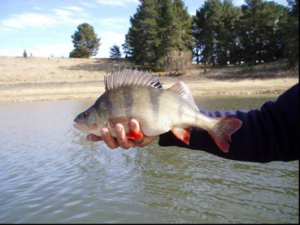 The study explains that Redfin have contributed to the decline of native fish populations, primarily as a result of predation.   In studying the diet of juvenile Redfin, it was discovered that “[m]ost juvenile redfin perch with prey items in their guts…had consumed native fish” (see above photo of a redfin that has eaten Southern pygmy perch).

The authors of the study, Wedderburn and Barnes, conclude that:

This links in nicely with a story that we recently shared about one of our projects that involved building in-stream barriers to protect Southern pygmy perch, a threatened native species, from predators such as redfin and carp. From this study it is clear that redfin pose a significant threat to our native species, and that is why we were involved in this project. You can read about our project here.

If you would like to read more about the study, you can find the abstract here: <a href=”http://www.publish.csiro.au/view/journals/dsp_journals_pip_abstract_Scholar1 online project management tools free.cfm?nid=90&pip=ZO15083″>Piscivory by alien redfin perch Perca fluviatilis begins earlier than anticipated in two contrasting habitats of Lake Alexandrina, South Australia.

0 Comments on "We hear a lot about carp, but what about redfin?"