How is the state of our climate, and how can we respond with optimism and not despair?

The World Meteorological Organisation (WMO) recently released a statement on the Status of the Climate in 2015, highlighting the concerning trends in the changing climate that have continued into 2016.  Unfortunately some of the changes reported include the following:

Ocean Heat and Sea Level: Large areas of the world’s oceans, particularly in the central and eastern Pacific Ocean, were much warmer on average during 2015. Increased ocean heat contributes to rising sea levels, which were the highest ever recorded last year.
Temperature: Many countries experienced intense heatwaves, particularly in India and Pakistan. Asia and South America had their hottest years on record, while North West USA and Western Canada suffered from a record wildfire season due to the heat.
Heavy Rainfall: Although the overall global precipitation was close to the long-term average, there were many cases of extreme rainfall. In some cases, 24 hour total rainfall exceeded the normal monthly average.
Drought: Severe drought affected many regions in the world, particularly in southern Africa and South America. This has had a significant impact on agricultural production and food security.
Tropical Cyclones: There were several rare and unusually strong hurricanes and cyclones recorded during 2015.

Each of these changes are occurring rapidly, and it is clear that without action there will be significant problems in the future.

Okay, how do you feel when you read this?  It is easy to wonder what action can be taken in response to these findings, and to feel somewhat helpless in bringing about change.  The WMO recognises this and explains that:

Building climate and weather resilient communities is a vital part of the global strategy for achieving sustainable development and combating climate change.

We agree with this but we are not sure that organisations like the WMO know how to do it.  That is a big part of  why we are doing what we are, here at Rivers of Carbon. We are investing in projects that restore vegetation which has multiple benefits, particularly in the context of climate change.  This includes improving stream, river and pasture health to safeguard it for the future, as well as providing refuges for wildlife from climate change extremes. If you would like to find out more about what we are doing and get involved you can go to our Our Projects page.

We also invest in people and optimism, and someone who is an expert at this is Les Robinson with his Enabling Change approach.  Les wrote a terrific paper about how we can craft a climate change message that shifts the focus from negativity to action.    As Les points out:

When people are presented with uncomfortable facts, denial is always the most convenient option unless there is an immediately available, credible action, within their perceived abilities, that reduces the discomfort.  So let’s shift the focus from knowledge to action… It reduces denial and focuses on the ultimate point of communication – action! It lets us tell hopeful stories about optimistic people living their dreams. And when many people act, it’s “social proof” that the action is right, safe and desirable. 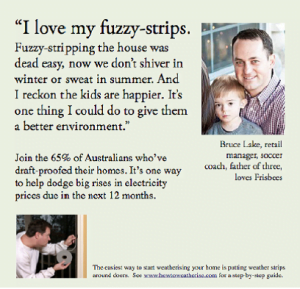 Les’s paper takes you through a process of personalising climate change so that people can take action to care for themselves, their family and their community.  This takes you from a  fact-based, global, gloomy, abstract, and helplessness-inducing message to one that is action-based, personal, inspiring, concrete and empowering.

Want to see how he does it?  Follow this link to find out and join the Rivers of Carbon team in believing in the ability of people to adapt, act and respond with optimism to climate change.

You might also like to take the time to watch this TEDx Talk from Bert Jacobs about optimism and their journey to create the ‘life is good’ brand.