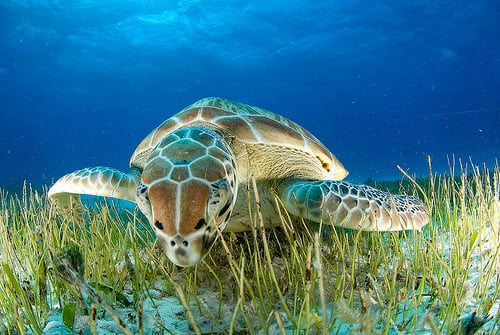 What is ‘blue carbon’ and why is it so important?

Blue carbon is the carbon stored and sequestered in coastal ecosystems such as mangrove forests, seagrass meadows or intertidal saltmarshes. These valuable ecosystems hold vast carbon reservoirs; they sequester atmospheric CO2 through primary production, and then deposit it in their sediments. In fact, most blue carbon is found in the soils or sediments beneath the vegetation.

The rates of carbon sequestration and storage are comparable to (and often higher than) the sequestration rates in carbon-rich terrestrial ecosystems such as tropical rainforests or peatlands. Unlike most terrestrial systems, which reach soil carbon equilibrium within decades, deposition of carbon dioxide in coastal ecosystem sediment can continue over millennia. However, when these coastal ecosystems are degraded or destroyed they can become carbon dioxide sources due to the oxidization of biomass and organic soil.

Because coastal ecosystems do contain substantial amounts of carbon, and because this carbon is in danger of being released, they are important in mitigating climate change. Unfortunately, however, the rate of loss of mangroves, seagrasses and saltmarshes (driven mostly by human activities) is estimated to be among the highest of any ecosystem on the planet, prompting international interest in managing them more effectively for their carbon benefits.

In addition to carbon, coastal ecosystems are highly valuable for a range of services they provide. They protect people from coastal erosion, storms and flooding; also making them valuable for climate change adaptation. They provide food from fisheries, as well as a habitat for juvenile fish to thrive in. They can improve coastal water quality by trapping sediments and nutrients. They can provide revenue from tourism, as well as materials for building or ingredients for medicines. All in all, these ecosystems are highly valuable not only for their contribution to climate change mitigation on a global scale, but also for the many valuable services they provide locally.

The Blue Carbon portal is a great place to explore what is happening internationally, with Australian projects also featured.

Another useful site to explore is the International Blue Carbon Initiative which is a coordinated, global program focused on mitigating climate change through the conservation and restoration of coastal and marine ecosystems. Coastal ecosystems are some of the most productive on Earth. They provide us with essential ecosystem services, such as coastal protection from storms and nursery grounds for fish. We also know that they provide another integral service – sequestering and storing “blue” carbon from the atmosphere and oceans and hence are an essential piece of the solution to global climate change.