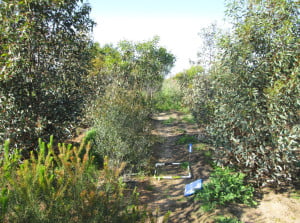 The developing carbon market has created incentives to plant forests that offset carbon emissions. But what types of forests should we plant? Will monocultures of fast-growing trees like those used in the timber industry maximize carbon storage or is there another option?

Our research team has been particularly eager to explore this question in relation to processes such as Australia’s Carbon Farming Initiative (CFI). This Initiative provides both guidance and monetary incentives to landowners interested in growing trees to generate carbon offsets. While approved methodologies include those that allow either mixed species plantings or monocultures, looking across the Australian landscape, many forests planted for carbon adhere to the one-species model.  This may be due, at least in part, to a perception that single species plantings sequester more carbon than mixed plantings. However, few ecological studies have examined the contribution of tree diversity – in particular tree richness and composition – to carbon sequestration and storage. While our research group in Western Australia has set up a large experiment to do just this (See Perring et al. 2012), growing forests to sequester carbon takes decades. Hence, we decided to examine how tree diversity might affect carbon storage by compiling data from existing studies (Hulvey et al., 2013). 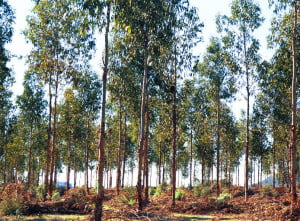 A mixed tree planting at Ridgefield multiple ecosystem services experiment on the UWA Future Farm, east of Perth, Western Australia. Trees and shrubs were planted in 2010 in 25x25m plots in different combinations ranging from 1 to 8 species. The land was previously grazed or cropped land. (Photo by Kris Hulvey)

Because few studies directly examine tree diversity’s contribution to carbon sequestration and storage, we used stand above-ground biomass (ie, tree stems and branches) as a proxy for carbon storage in planted forests. We then used meta-analysis to compare biomass production in mixed tree plantings to that in monocultures. We reviewed over 150 studies from the biodiversity-ecosystem functioning and forestry literature, but narrowed this pool to eight studies via a couple of criteria. The most important of these were that studies needed to report data from tree monocultures and mixes that were grown at the same site – this eliminates productivity differences stemming from abiotic conditions. In addition, studies needed to have designs that distinguished between density and diversity effects to avoid confusing diversity effects with biomass increases stemming simply from planting more trees in a stand. From the eight studies that met all criteria, we were able to use 18 unique comparisons of the biomass produced in tree-mixes to that produced in monocultures.

In some situations, mixes outperformed monoculture plantings, producing on average 17%-18% more biomass than plantings consisting of a single productive species. 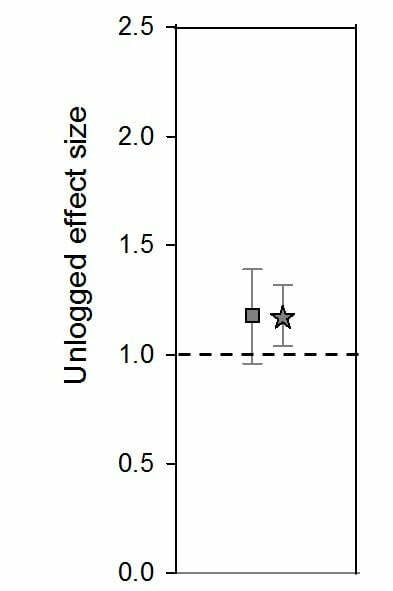 What’s more, we found that including key species in these more diverse tree mixes can facilitate stand growth, likely leading to higher carbon storage. In particular, nitrogen-fixing trees increased stand biomass. Managers that employ single fast growing tree species in carbon plantings already recognize that tree identity is critical to maximizing carbon yields. Our results highlight that some tree species may work in synergy with other trees to maximize carbon storage. In the case of nitrogen fixing species, these trees may facilitate the growth of nearby trees by providing additional soil nitrogen.

Consequently, our research suggests a two-pronged strategy for designing carbon plantings including: (1) increased tree species richness; and (2) the addition of key species that contribute to carbon storage. More research on the mechanisms leading to increased productivity in mixed-tree stands can further enhance our understanding of the best planting designs in carbon forests.

While the main goal of current carbon projects is to optimize carbon sequestration and storage, tree species diversity may provide other benefits as well. For example, biodiversity theoretically favours functional stability, and many studies in grasslands show that biomass production is more stable in diverse communities. For mixed-tree plantings, this may translate to greater resistance and/or resilience to disturbance events like pest outbreaks as well as to slow directional changes such as from climate warming or atmospheric nitrogen deposition.

Mixed forests may also increase the potential for carbon plantings to provide additional ecosystem services beyond carbon storage. Research on ecosystem multi-functionality indicates that diverse species assemblages are more likely than monocultures to provide high levels of multiple functions simultaneously. In the case of forests, people are also interested in protecting habitat for biodiversity, and demand for projects that both sequester carbon and protect biodiversity have more than doubled between 2011 and 2012.

Most importantly, our work suggests that monoculture plantings are not always the only choice when planting forests for carbon storage. Studies that build on this result by examining how climatic and abiotic conditions interact with species diversity to contribute to carbon storage will be critical to advancing carbon project design. Importantly, however, we may miss opportunities for carbon plantings to achieve several goals simultaneously if research focuses solely on diversity’s contribution to carbon sequestration in aboveground biomass while neglecting its contribution to additional benefits that also are favoured by diverse carbon plantings.

Overall, a better understanding of how tree diversity affects carbon storage will be useful for designing carbon projects that both store large amounts of carbon and have additional ecosystem benefits.

This article was copied with permission from Decision Point Online, edited by David Salt for the Environmental Decision Group – the direct link to the article is here.