Although weathering and erosion are natural processes, human activities often accelerate the movement and loss of valuable soil. Soil is not just lost – it is washed into our creeks and rivers, smothering habitat and degrading water quality. This is a ‘lose-lose’ situation – where on-farm productivity is reduced as fertile soil is lost, and the health of our precious waterways is compromised as well.

Managing erosion can be daunting, and often it is hard to know where to start! This was the topic of our ‘Look, learn and ask’ morning at Ingalara Grass, kindly hosted by landholders Mike and Alice McAuley. Mike and Alice have only been managing the property for the last couple of years, but right from the outset, they have set about better understand their landscape. They are keenly aware that their property, which borders the upper Murrumbidgee River and incorporates the bottom end of Ingalara Creek, has the ability to affect the quality of the river. This meant that addressing three erosion gullies on the property is high on their list of priorities.

Caption: Mike and Alice providing an overview of their property Ingalara Grass and what is motivating them to work on erosion with the Rivers of Carbon team. Photo credit: Antia Brademann

Caption: Antia explaining the work being done on the property and how it relates to the overall catchment area. Photo credit: Tom Clarke

Erosion is something the Upper Murrumbidgee Demonstration Reach and Rivers of Carbon Upper Bidgee project funded by the NSW Environmental Trust, are also keen to address. We are now working in partnership with Mike and Alice to stabilise the gullies on the property, and our field day was an opportunity for landholders to ‘look, learn and ask’ about the process we are using to do this. We know erosion is something many landholders thing about, so despite it being one of the windiest days we have had this spring, we had a great turn out of thirty people.

Lori Gould, Rivers of Carbon Project Manager and erosion veteran with many years’ experience prioritising and understanding erosion, was our guide for the day. She explained erosion processes and discussed management options as we walked and talked along the erosion gullies.

To begin, we learnt how to tell which parts of a gully are ‘active’ and which are stable or moving to a stable state ‘on their own accord’, even though they still might look terrible. Tackling the active areas to protect your land and downstream waterways is the key. The most active areas are often the ‘headcut’ areas. A headcut is the very top most point of the gully, which, if left to erode has the potential to expand the gully further uphill – these are the number one priority erosion areas to address. Lori showed how understanding the way water moves over your landscape, as well as your catchment size, soil type and layers, is essential to deciding on an erosion solution.

This gully has a shallow, wide headcut area with a gentle slope. The headcuts in this gully head were less than 1 metre high, and the site has a gentle slope, which makes it suitable for low cost erosion methods like hay bales. Any landholder can carry out these using on farm materials and hand tools. The landholder aims to remediate this area as part of the project using rock (at headcuts), mulch and some minimal shaping. Coir logs and planting in the gully floor will be carried out downstream of the headcut to stabilise the gully floor and catch sediment which will be entrained as the gully walls achieve a more stable batter slope over time.

Caption: These photos show the top of the headcut that is being treated. If this was left it would continue to extend up the hill losing valuable soil and making the road unusable.

Lori talking about what we are looking at with this headcut and the management options available. Photo credit: Antia Brademann

Downhill of the headcut, the gully became deep very quickly, with a narrow floor and steep walls and the elevation dropping more quickly. In this situation Lori showed us how the water gets concentrated in the base of the gully and can cause the walls to fall in. 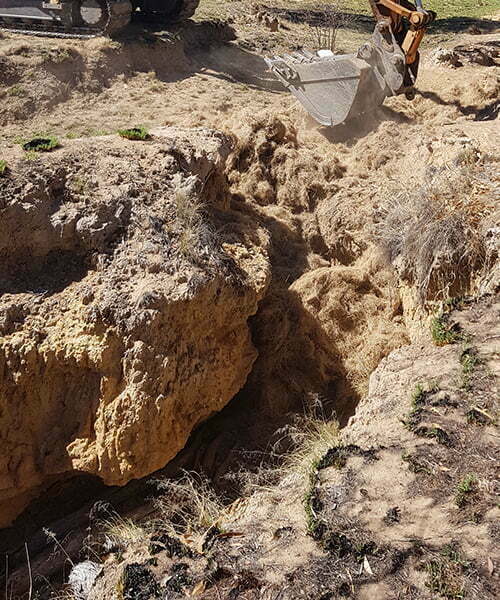 Close up the gully floor. Mike and Alice are trialling filling the bottom of the channel with a thick layer of grass mulch gathered from the property. Photo credit: Antia Brademann

Mike and Alice have cut hay off their property and are trialling the use of this wedged into the floor of the gully to reduce the force of the water and trap silt that may be washed down. Lori highlighted that any materials placed into the gully need to be soft, as any hard structures such as logs and rocks could be outflanked and direct the force of the water against the wall of the gully – causing further erosion.

In other areas, the gully walls had started to form a slope – nearly 45 degrees in some cases. In these areas we could see groundcover establishing, supported in part by the gradient. Groundcover is the landholder friend and important for gully stabilisation. It is for this reason that maintaining groundcover is key to preventing erosion in the first place. It was plain to see on our walk that where groundcovers are re-establishing the gully is stabilising. This is why it is so important to prevent stock or other animals (such as feral goats/deer) from grazing and trampling these areas. This is what we mean by ‘mess it up and slow it down’, as thick dense groundcover (although a bit messy looking) will hold soil and slow down water, preventing more erosion by reducing the force of water and preventing scouring!

Here we can see groundcover establishing to stablise the gully and protect against further erosion. Photo credit: Antia Brademann

This gully is more incised right from the top with steeply incised walls, some of which are falling in due to erosion on the gully floor and some areas which have vegetation. There are some areas where a narrow channel is incising through the vegetation and channelising flows in the gully which is adding to erosion even during small discharge events.

There is another headcut area lower down on Gully 2 to the west of the rock flume on Gully 3. The headcut is active, but there are established trees growing above it, which would be helping to stabilise the area. We know this is not a total solution for this gully and we feel that there will be some works required to stabilise it. At this stage we have decided to spend available funds through the Rivers of Carbon project on the Gully 3 headcut as we feel it is the key to preventing the erosion from continuing further. Gully 2 will need a qualified specialist to come in and assess the works options available.

Gully 2 below the rock flume works area. This headcut is at least 1.7m deep and active. Photo credit: Antia Brademann

Lori highlighted that this type of headcut has been formed by a greater volume of water cascading over a longer fall, so the energy involved is greater. In these instances it is important to get professional expert advice to design the appropriate erosion solution.

Group walking across from Gullies 1 (above) and 2 (below), heads down against the wind! Photo credit: Antia Brademann

This gully has tunnel and pillar erosion. At this stage we are focussing on stabilising the top of the gully before turning our attention to these areas lower down in the gully. Photo credit: Antia Brademann

At Mike and Alice’s the New South Wales Soil Conservation Service team from Cooma designed and installed a rock on the headcut on Gully 3 as part of our Rivers of Carbon project. Prior to the works the headcut was 1.5m deep, with tunnel erosion evident. The gully was reshaped with large earthmoving equipment and the rock flume built.

The rock flume has wings to direct overland flow and reduce pressure on adjacent areas. The site was seeded with ryecorn, and mulched to ensure groundcover is established quickly. Coir logs as well as Poa and Lomandra were put in downstream of the flume to stabilise the gully floor below the flume.

New rock flume at the top of the headcut prior to planting. Photo credit: Antia Brademann

Planting at the base of the rock flume with temporary exclusion fence while the plants establish. Photo credit: Antia Brademann

As part of our project Mike and Alice will also plant trees around the gullies to help stabilise the gully areas at Ingalara Grass (especially at the top of them) and to support future soil stability. Lori notes that when planting trees around gullies they should not be planted so that they will shade out future groundcover which could be establishing on the gully walls/sides. This means planting the trees back at least 3 -5 metres from the edge of the gully, with grasses and shrubs used closer to the edge of the gully and on the gully floor. The gully area will also be fenced to exclude stock.

Field day attendees were also able to take home a lot of wonderful resources from the Australian River Restoration Centre to further read up about best practice methods – you can see them here. Thanks to Mike and Alice for hosting the day and Lori for sharing her expansive knowledge and expertise!

Siwan thanking Mike and Alice for allowing us to hold the field day at Ingalara Grass. Photo credit: Antia Brademann 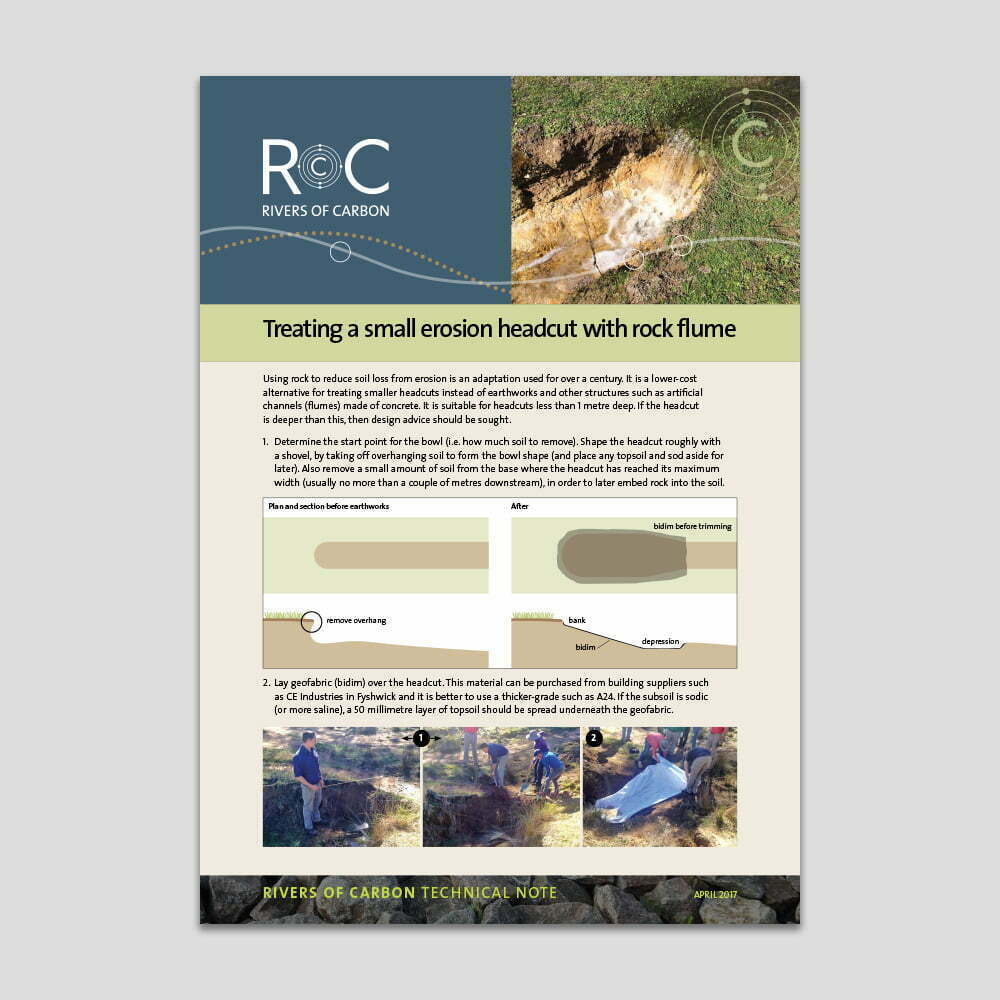 Treating erosion on your place does not need to be difficult and expensive. Depending on what sort of erosion you are dealing with, much can be done with rock, hay and some willing helpers. 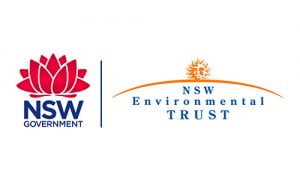