We are honoured to work on the ancestral lands of the Ngarigo and Ngunawal people, and we recognise their continuing connection with, and knowledge about land, waters and community. We pay our respects to them and their cultures; and to Elders past, present and emerging.
Adapted from: Welcome to Country & Acknowledgement of Country – Creative Spirits

Most species of willow are Weeds of National Significance. They are among the worst weeds in Australia because of their invasiveness, potential for spread, and economic and environmental impacts. To read more about the problem with willows, click here.

“Within a 25km squared study area, canopy area and water savings estimates suggest that a the removal of 10.4 ha of willows will potentially return 41ML of water per year to the environment.” 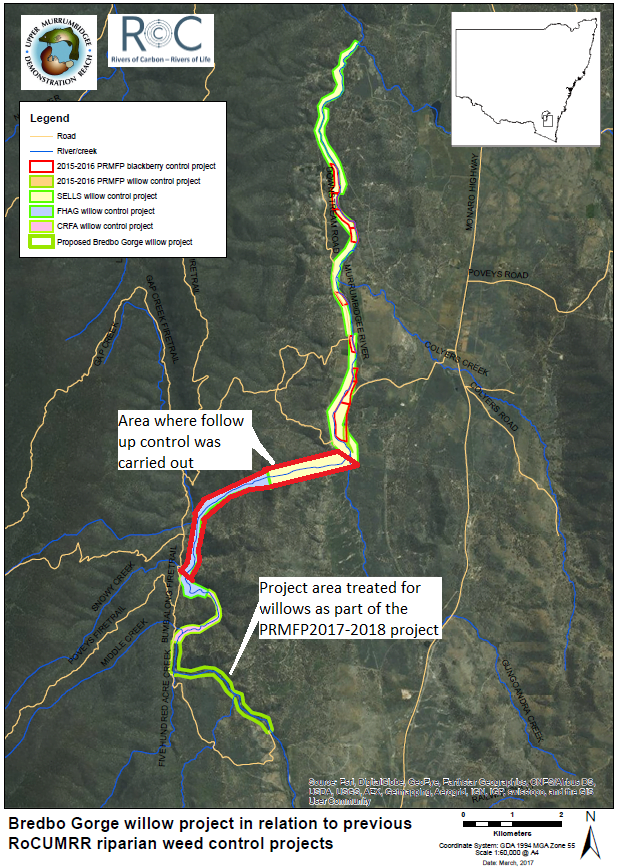 Why willow removal on the Murrumbidgee?

The purpose of this project was to treat invasive willow species along the upper Murrumbidgee River to enhance high quality native riparian vegetation found within the Bredbo Gorge.

This work has helped to protect an area of priority native fish habitat, and prevented further weed incursion of willows into riparian rehabilitation works which have been implemented downstream as part of the Rivers of Carbon Upper Murrumbidgee River Rehabilitation project.

The Gorge is also a popular local recreational use area accessed via the Bumbalong Fire trail.

The project focussed on the treatment of crack and seedling willows in the top section of the Bredbo Gorge, as shown on the original project map below, in order to protect and enhance the high quality riparian and instream habitat found in the Gorge, which is vital for the native fish who live there.

The treatment work required contractors to access the area on foot, traversing steep country and deep, rocky in-stream sections. Skilled contractors were used for this project due to the size and amount of mature willows, the inaccessibility of the site, and the technical issues associated with achieving a complete kill (such as treating multiple stems and buried shoots, build-up of flood debris, size of willows and, in some cases, willows growing in-stream and submerged under water).

The below photo shows the start of the pool at the downstream end of the project area prior to willow control works. A scattered to medium infestation of crack willow of various ages can be seen with the infestation occurring both in-stream and in the riparian areas. The willows have reached a critical mass where further spread threatens to affect riparian vegetation and instream habitat. 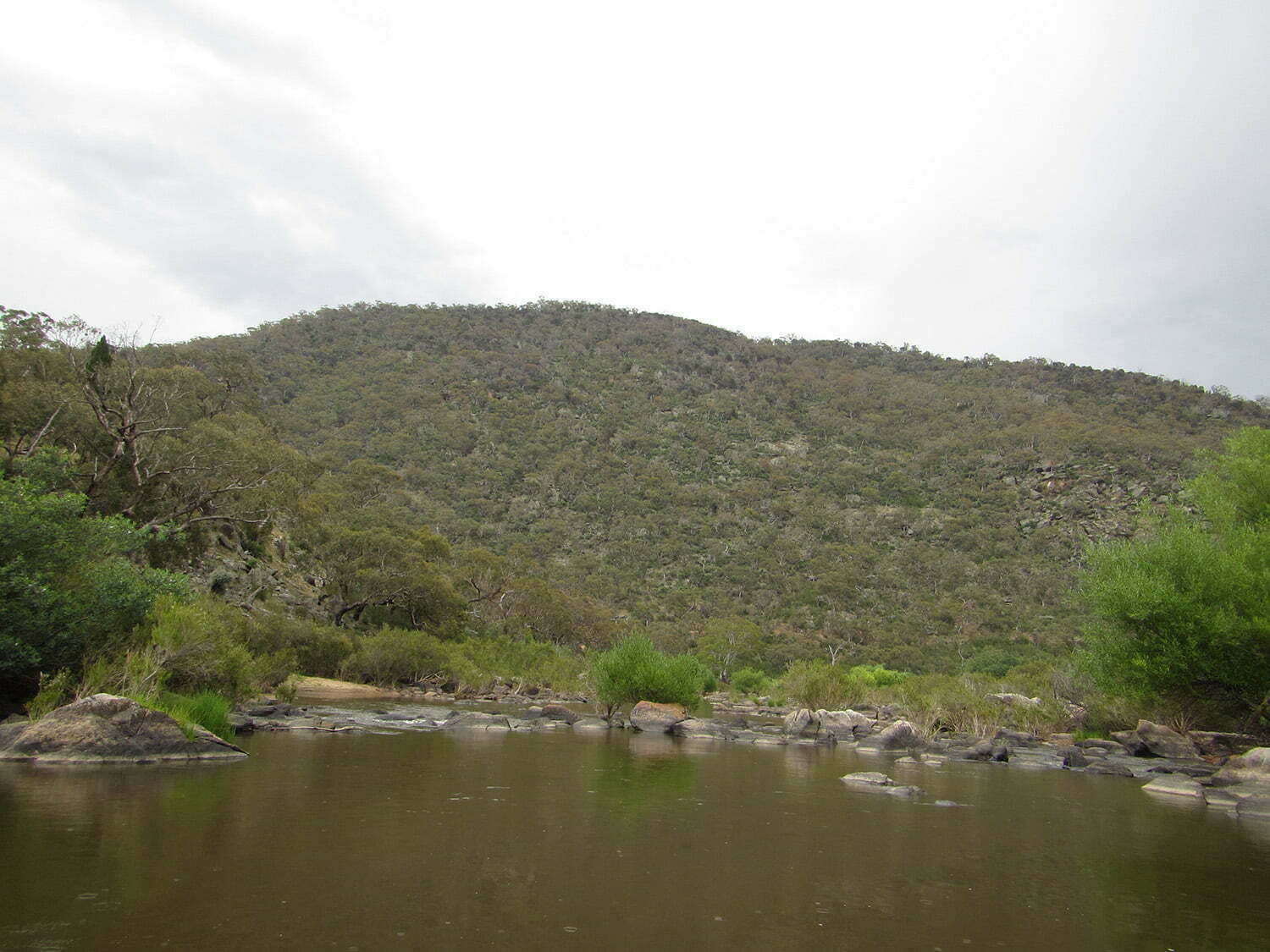 The below photo shows the same area after the control works have been carried out. The dead branches of the controlled willow can be seen amongst the native vegetation.

This photo shows the left bank of the river, with the ‘Goatshooters hut’ up on the bank. This area was a hotspot for willows, which have now been controlled, as can be seen by the dead willow wood in the photo.

Types of willows requiring treatment can be seen in the next photo. These are typically large, multi stemmed, and sometimes growing in the water. This adds to the complexity of the task of achieving a successful kill. The willow that can be seen tucked in behind the rock was growing partially in the water. In this situation, the submerged root system can survive treatment and reshoot, however, due to the skilled and experienced contractors, we use a complete kill was achieved in this instance.

We can see how controlling the willows has enabled native vegetation (including reeds) to flourish as they are no longer shaded and out competed.

The treatment area was surveyed after the control works and any new seedling or re-emerging treated willows were mapped. The below photo shows that there were some willows which were not completely killed during the project works. Re-shooting can occur, and highlights the importance of follow up works in the years after the project to ensure re-infestation does not occur. In the photo we can see the light green trees at the edge of the bank are willows growing on a sandy delta where a drainage line enters the river.

With support from Crown Lands, we have been able to link the removal of weeds in Bredbo Gorge with downstream rehabilitation works focusing on the removal and treatment of a further 17km of willows.

UMDR’s Adventurous Volunteer program has monitored the treated the area funded through this Crown Lands grant to ensure control has been effective. We found that the majority of willows treated have been effectively controlled, but that there are a small amount of new seedlings or re-emerging willows. The location of these plants have been taken and follow up control works are prioritised.

Some of the volunteers are shown in the photo below undertaking the weed survey which found an 85% kill rate had been achieved by the contractors during the project. The UMDR has prioritised follow up control works in the project area.

This final photo shows the beautiful reach of river downstream of the treated project area where the high quality, weed free native vegetation that is now being protected by this project can be seen. This is ideal habitat for native fish and we really appreciate the Crown Lands grant that make weed removal possible.

Want to know more about our work on the Bidgee

The Upper Murrumbidgee River is a special place, with rich biodiversity, cultural heritage and communities keen to protect and restore the social and environmental assets the region contains. Our projects in this stretch of river are varied, and include adventurous volunteering, fish habitat creation, riparian revegetation, erosion control and community engagement.