By Antia Brademann and Kate McKenna

Check out this accompanying webinar recording, where Antia Brademann, the Upper Murrumbidgee Demonstration Reach Facilitator discusses how to identify Box elder and best ways to manage this invasive species.

What is Box elder?

Once native to North America, Box elder (Acer negundo) has spread globally and is now considered as a weed throughout Europe, South America, Australia and New Zealand. Box elder was introduced in Australia as an ornamental tree to decorate the parks, streets, home gardens and rivers of Australian towns. Box elder has now, however, become naturalized and has spread throughout almost all states and territories in Australia. The earliest records of it being naturalised in Australia are on the riverbanks of the Nepean River near Sydney from 1959 onwards. It is a medium sized, multi stemmed tree that can grow to 20m but most commonly is about 8m tall, especially when growing in the wild.

Although Box elder is not yet a ‘Weed of National Significance’, it has become a declared weed in several states, including the ACT.  This is because Box elder spreads rapidly in riparian areas and damp forests, especially in temperate zones. This guide has been prepared to assist landholders and catchment managers to manage Box elder in riparian (riverside) situations so that together we can protect and improve the health of our waterways.

The south-east Australian climate is ideal for the Box elder, especially around waterways where it is a successful and persistent invader. It is a fast-growing tree that out-competes native vegetation by shading and smothering surrounding vegetation with heavy leaf fall.  It also has an extensive root system that prevents other species from establishing.

In addition, mass leaf fall from Box elders can deplete oxygen levels in waterways which aquatic species need to survive. The decomposing leaf matter also forms an anoxic (low oxygen) thick mud which release nutrients that can create algal blooms.  Box elder is also a common weed in parks, recreation areas and gardens where it root system seeks water and can invade pipes.

Box elder is part of the maple (Sapindaceae) family. The maple family includes other similar weeds in Australia, like the Sycamore tree (Acer pseudoplatanus), which is an invasive environmental weed in areas such as the Blue Mountains (NSW).  Box elder is a small to medium, slender, deciduous, often multi-stemmed, tree that can grow up to 20 m high, but mostly only to about 8 m high in weedy situations (Weeds Australia). Box elder is very distinctive (compared to native vegetation) and can be identified by the following features.

The large leaves are mostly 20–30 cm long, divided into  3–7 (sometimes 9) leaflets that are oval to egg shaped or lance shaped. The petiole or leaf stalk is 5–12 cm long. The plant is very noticeable by its lime green leaves in summer, which turn bright yellow in the autumn before leaf fall. Leaves may be entirely green or white-variegated, such as in nursery specimen. Variegated forms of Box elder revert to wholly green-leaved plants in the wild, including the often planted Acer negundo ‘Variegatum’ that has broad white-margined leaves. 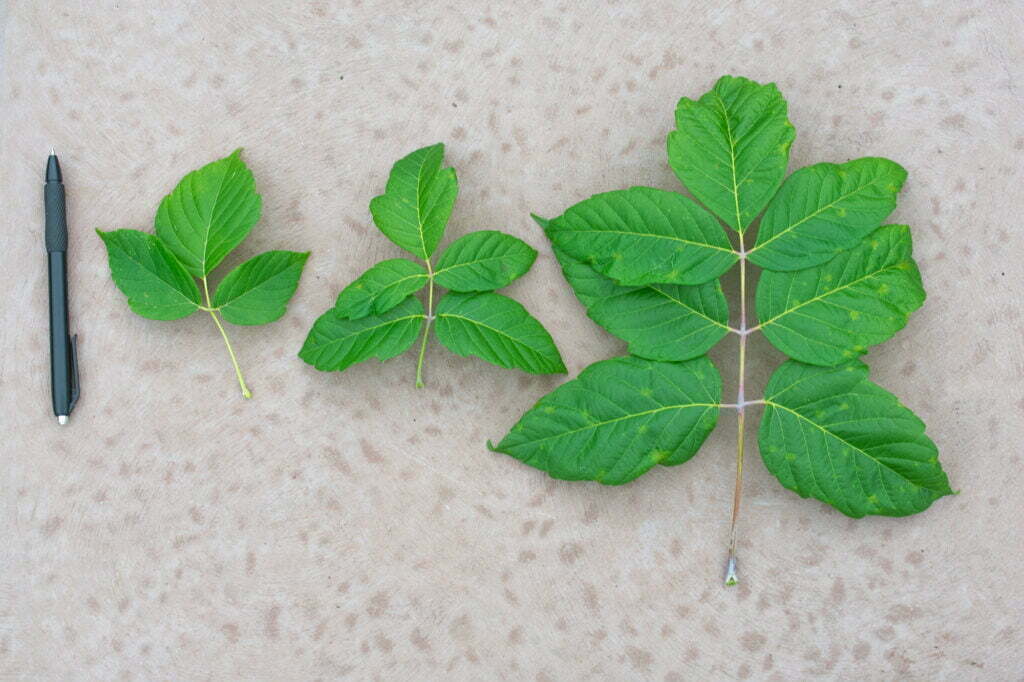 Flower heads appear before or with the leaves and usually has male and female flowers on different plants. The small flowers are greenish, yellowish green or sometimes pinkish, either male or female, and lack petals. Male flowers hang in clusters, while female flowers occur along a drooping branched stalk.

The dry, winged fruits (called samaras) are pale yellowish green, 3–4 cm long, with the yellowish wing strongly veined. Two samaras are fused together at their bases to form a V-shape and these fruits spin like propellers when they fall to the ground. The fruit turns brown as it dries out in and is retained on the tree over winter.

Box elder has smooth light grey or grey-brown bark on the younger stems, which becomes fissured or flaky with age.

Where do Box elder grow?

Biology of the Box elder

The Box elder is a deciduous tree (losing its leaves in winter) that flowers and produces its leaves in spring. Flowering usually occurs in early September, before or with the new leaf growth. Box elders are dioecious meaning that they bear male and female flowers on separate plants.

The Box elder male flowers do not persist on the plant after spring.  Female plants develop fruit prolifically over the summer period, with large bunches of winged fruits (called samaras) persisting on the plant throughout most of the year.  Female plants are very noticeable in winter, when bunches of the Box elder’s dried, brown fruit persist on the plant after leaf fall. The fruit drops in late winter, carried by wind and water and then results in mass germination of seeds in spring, which can form extensive carpets of seedlings. The seeds can also be carried by birds and animals or spread by garden waste and mulch.

The Box elder’s large seed means it has a competitive edge to other vegetation and is able to establish in situations where there is good groundcover, shade and high competition. Its ability to mass germinate means that Box elder is able to spread very readily and outcompete other vegetation.  Once established, Box elder plants are very resilient, being able to persist despite being covered by sand, and re-sprouting after damage along its stem. Box elder can readily re-establish from root suckers if the crown of the plant is damaged or poisoned.

How to control Box elder

Prevention is the best proactive control plan for Box elder so we are encouraging people to not plant or allow this species to set seed, especially near natural waterways, moist gullies, wet forest or woodland.  It is important to be aware that cultivars of Box elder, the variegated type Acer negundo ‘Variegatum’, will revert to the natural type when in the wild.

The NSW Weeds Action program recommends revegetating areas that have had Box elder removed with native trees and shrubs appropriate to the control area. Shrubs such as Hakea, bottlebrush, wattles and tea-trees are suitable species found in riparian areas that can replace Box elder trees. This can be really important where Box elders have shaded out native vegetation or where banks are unstable.

As yet there is no biological control agent for Box elder.

Box elder has the potential to become a highly problematic invasive species in south-eastern Australia if it is not managed and removed, especially around waterways. It has severe impacts on surrounding vegetation and habitat for native species and can cause serious erosion and water quality issues. The best control method is prevention, however, where it is present, chemical control through cut-and-paint or stem injections can be effective for established trees, whilst seedling removal for very small trees is also effective. Revegetation of native plants and trees is the best follow-up control method.

The Upper Murrumbidgee Demonstration Reach (UMDR)’s Adventurous Volunteer program involves specially trained volunteers who raft along the river and undertake work that helps to protect and improve the health of the upper Murrumbidgee River. The volunteers have been paddling along the river to map Box elder infestations to help support weed control programs being carried out by catchment managers such as the ACT Government, the Upper Murrumbidgee Demonstration Reach partnership, Landcare and Local Land Services. The mapping has found that Box elder is proliferating along the river including into areas of high-quality vegetation which have so far always been free of environmental weeds.

The volunteers are also involved in carrying out Box elder control. The work compliments existing control programs by tackling Box elder within the inaccessible gorge sections to protect high quality native vegetation and also by carrying out follow up in areas that have been previously treated. The volunteers raft in to work sites carrying their weed control kits and equipment.

This guide has been made possible thanks to funding from the federal government’s Murray-Darling Healthy River Program. The guide has been developed to support the objective of the Upper Murrumbidgee Demonstration Reach partnership to protect and improve the health of the upper Murrumbidgee River for the benefit of native fish and community well-being.

Please check out other helpful guides: