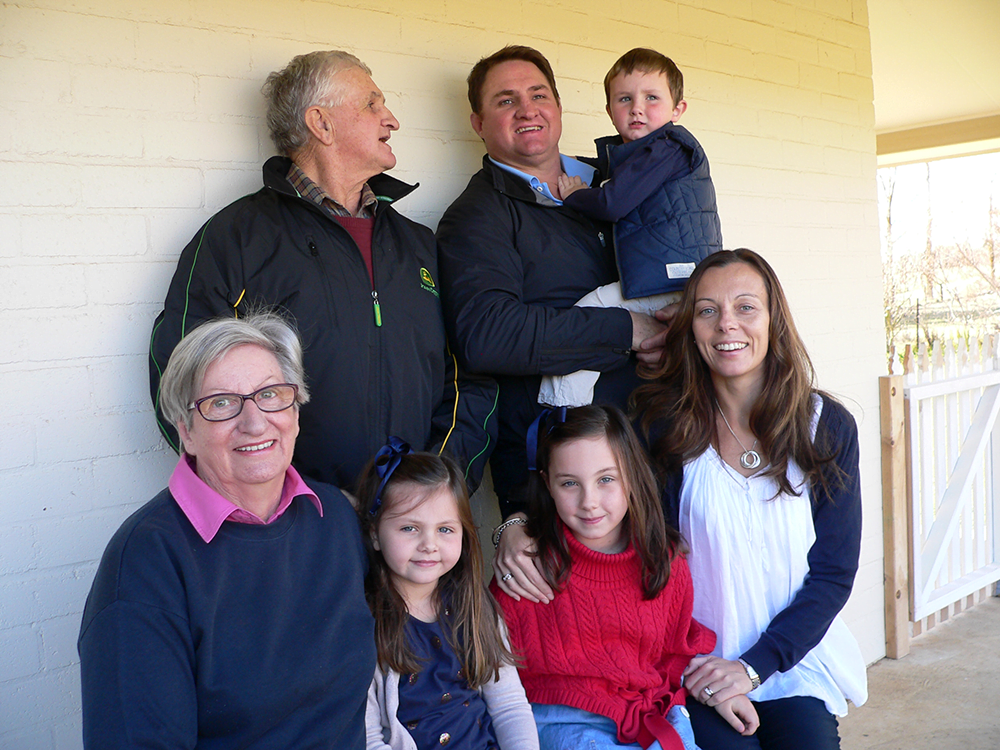 Caring for the land and farming sustainably are key drivers for the McCormack family on their long-held property Red Hill, at Crookwell, NSW. Catherine McCormack and her children settled the property Red Hill in 1863, and Tom and his wife Perry, along with their son James, his wife Natasha and their children Tara, Marnie and Finn, are now the fourth, fifth and sixth generations to live and farm on the property.

Three generations of the McCormack family live at Red Hill, near Crookwell, which was settled in 1863. Back: Tom, James and Finn McCormack. Front: Perry, Marnie, Tara and Natasha McCormack.

Red Hill is 670 hectares, while Mt Henry, which was purchased in 2009 to add to their holdings, is 405ha. The McCormack family run about 4,500 sheep including a self-replacing Merino flock and a first cross ewe flock joined to Poll Dorset rams for prime lambs.  Cattle are also traded depending on the market and season.

After the success of their Landcare efforts on Red Hill, assisted by Envirofund grants and support through Greening Australia’s GreenGrid project, a long-term partnership with TransGrid, the McCormack family were keen to continue this work at Mt Henry.  Becoming involved in the new Rivers of Carbon initiative has enabled the repair of some significantly eroded gullies on Mt Henry to begin. 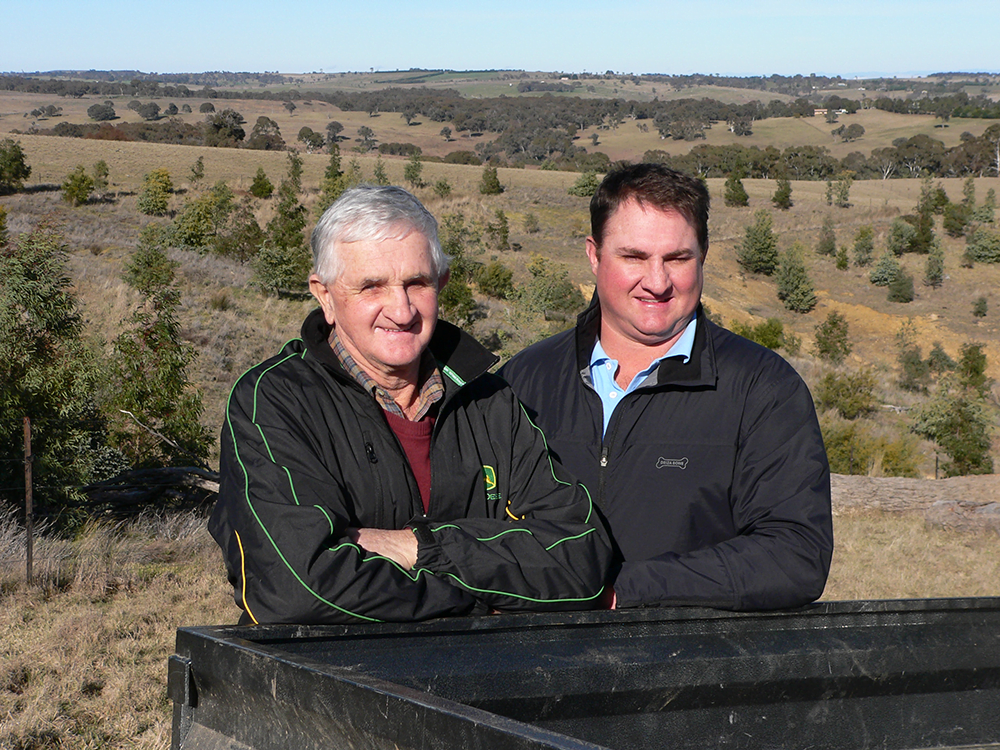 After the success of some of their Landcare efforts on their Crookwell property, Tom and James McCormack were keen to continue the rehabilitation work.

“The gullies have eroded in the past 50 years and in some places the drop into them is 20 feet which is dangerous. This was the big motivator for us to get involved to ensure the land didn’t get any worse; if we left it for too long the erosion would start creeping up the hills and taking away more viable, productive country,” James said.

“Repairing the land and reversing the damage is very important to us, we want to farm sustainably, drought proof and continually improve both Red Hill and Mt Henry,” he said.

The McCormack family’s passion for trees started with Tom, who began planting shelter belts in the 1980s, despite having spent time as a young man pulling out trees with his father.  Initially, the tree-runs were self-funded but then Tom became involved in Landcare and was able to access funding which he embraced. 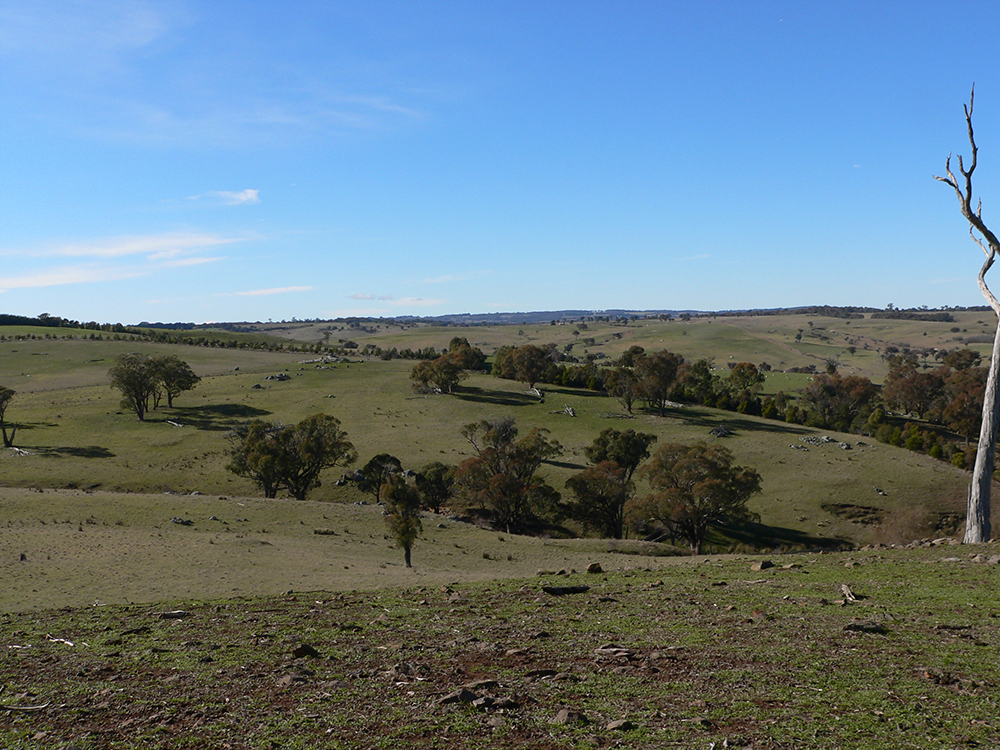 Tom has become a passionate advocate for planting trees. About 80 per cent of the tree runs on the McCormack family farm, Red Hill, link up creating vegetation and wildlife corridors.

Tom started by fencing off small pockets of land, 2-3ha, in corners of paddocks or along paddock boundaries to join the tree runs throughout the property. About 80 per cent of the tree runs on Red Hill link up creating vegetation and wildlife corridors. Initially, the tree runs were only about five metres wide with one to two rows of trees but now the corridors have been widened up to 30 metres with four or five lines of trees in them, with at least four metre spacings between trees.

“It is not so much the loss of the land but the cost of the time and infrastructure needed to do it. An average tree run costs approximately $15,000 to fence and establish which is a lot of money when it is self-funded,” Tom said.

“We are doing this work for livestock shelter, the environment and aesthetics andmost importantly to leave the land in a better way for the next generation,” he said.

“I think trees are beautiful and an important part of our landscape.” 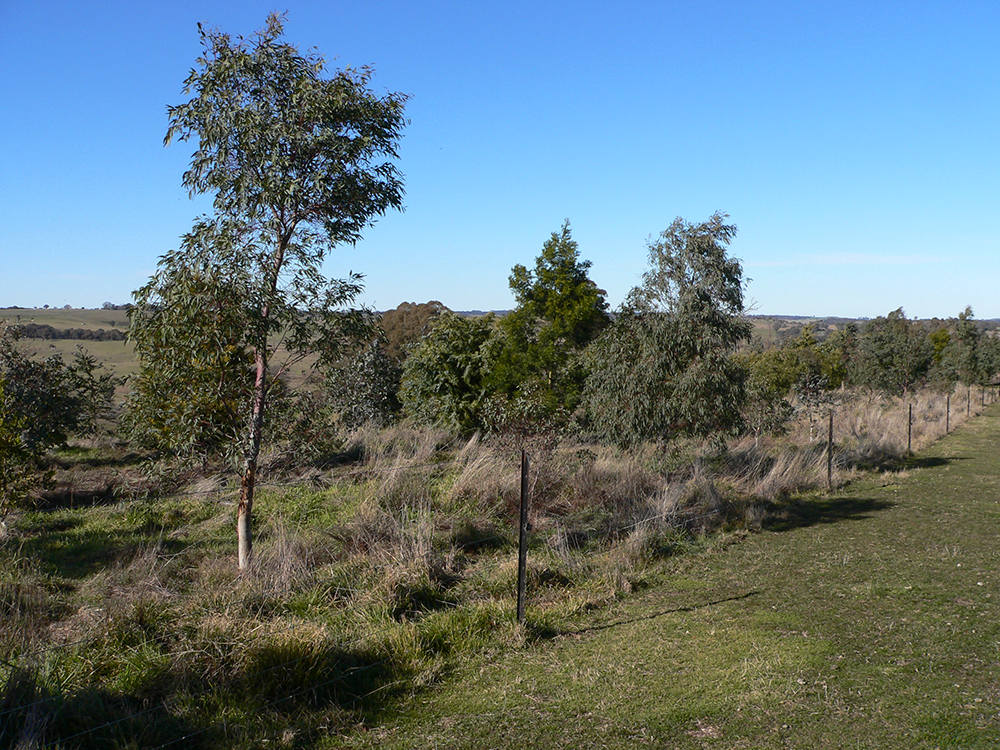 Tom has become a passionate advocate for planting trees. About 80 per cent of the tree runs on the McCormack family farm, Red Hill, link up creating vegetation and wildlife corridors.

According to Tom, although widening the tree run has taken more land, it has been more productive, as they have observed better tree survival rates, improved ground cover between the trees and increased numbers of small bird species in the tree runs because there is more cover.  Red Hill comprises a mix of native and improved pastures including Ryegrass, Cocksfoot, Phalaris and Microlaena (Weeping Grass).

A special aeration machine, called an Aerway, is used to prepare the ground before planting tubestock. This system inserts lots of small holes into the soil (as an alternative to traditional rip lines) which keeps soil disturbance at a minimum, reduces compaction and allows a full profile of water to sit in the holes after rain events with minimal runoff.

The McCormack’s have trialled direct seeding, but have had better success with tubestock, as the species planted can be controlled. A variety of Eucalyptus species are planted along the outside of the tree run including Yellow Box (Euclyptus melliodora), Stringybark (E. obliqua), Peppermint Box (E. odorata) and She-oaks (Casuarina equisetifolia), while short-lived species such as Wattles and Bottlebrushes are planted in the centre.

At Red Hill, the McCormack’s were able to access money through Envirofund to fence off several gullies which were eroding and to construct erosion control contour banks and dams. The areas have been revegetated and stock have been excluded. After the success of this project, the McCormack family decided to get involved with the Rivers of Carbon project which is focused on two severely eroded gullies at Mt Henry. 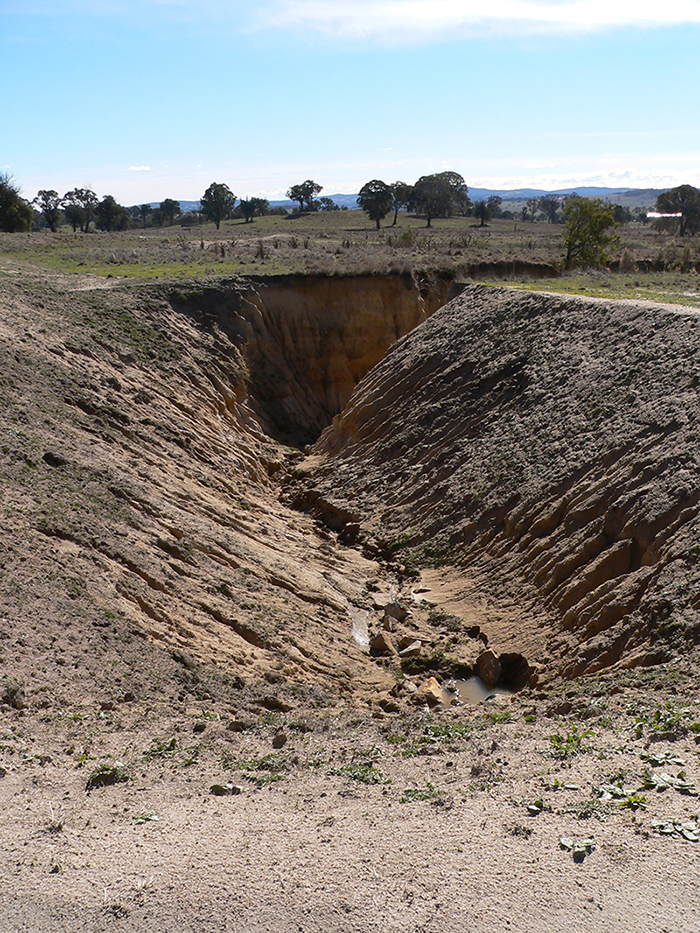 Becoming involved in the Rivers of Carbon project has enabled the repair of some severely eroded gullies on the McCormack’s property Mt Henry, which they purchased in 2009.

“The benefits at Red Hill have been significant as the land is healing, and we were keen to keep this work going at Mt Henry too, as part of the process of repairing the land,” James said.

“It was disturbing to see it changing in front of your eyes, we could really see the damage it was doing and how important it was to control the water and stock.”

Earthworks have been completed at the head of the gullies, including two dams and several contour banks to better manage the water and slow it down.  Pipes have been laid in the dam walls to take the overflow water onto the bedrock of the gully floor when the dams are full. Pipes have also been placed in the contour banks for water control and to prevent breakouts. 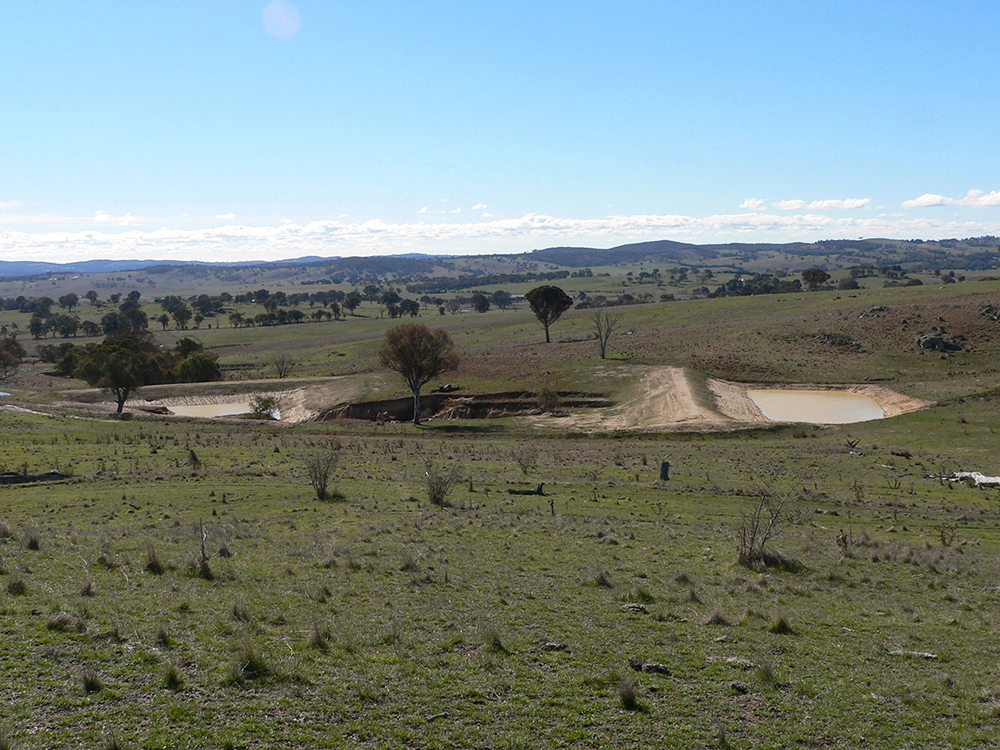 As part of the Rivers of Carbon project, earthworks have been completed at the head of the gullies on Mt Henry, including two dams and several contour banks to slow the flow of water.

“We will also place timber at the head of the gullies to slow the water flow down and disperse the water as it hits them,” James said.

The gullies have been fenced off, stock excluded from the fragile ground and plans are underway to revegetate the areas during Spring 2013. The riparian zone has been fenced widely to ensure sufficient area for revegetation.Tom has been researching different species to plant both in the gullies to stabilise the banks and revegetate the areas beside the gullies. A mix of native species which is adapted to the local area will be chosen and planted as tubestock. 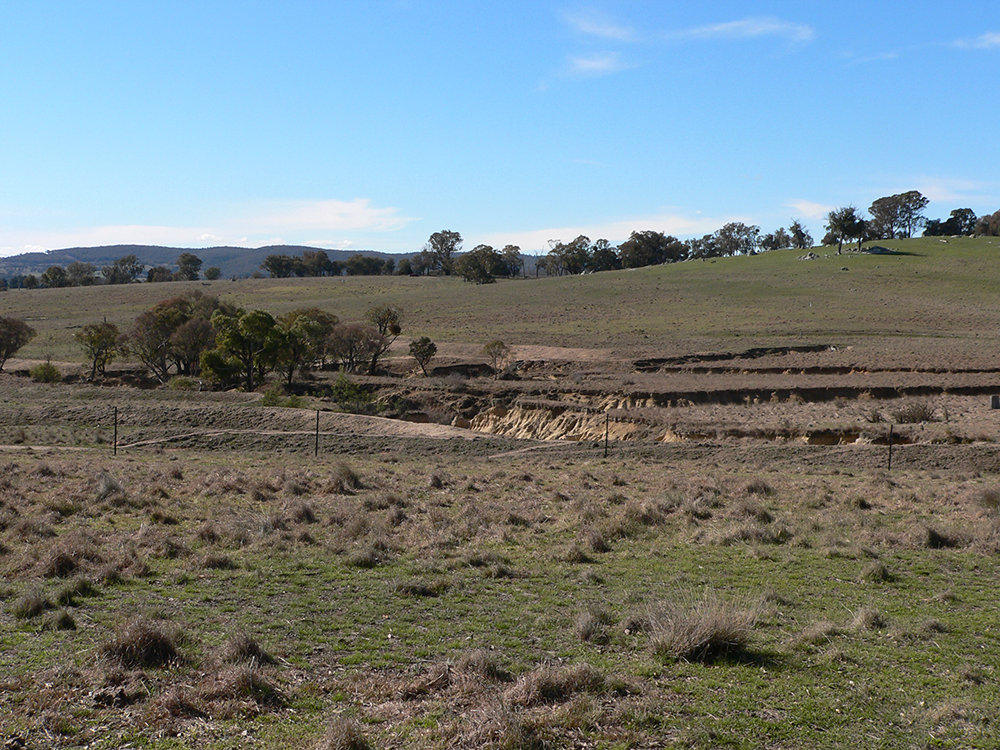 The gullies at Mt Henry have been fenced off, stock has been excluded and plans are underway to revegetate the areas during Spring 2013.

“Mt Henry is predominantly native grasses which are already established which will do a great job as  ground cover while the trees get established, we don’t want to use sprays and certainly don’t want any soil disturbance,” he said.

“We want to continue with our work and it will be ongoing but you have to have the funding to provide incentives to do the project. We are at the top of the catchment for the Lachlan River and the headwaters of the Wyangala Dam so it benefits all water users. We want to keep the soil on our property and not have it washed away.” 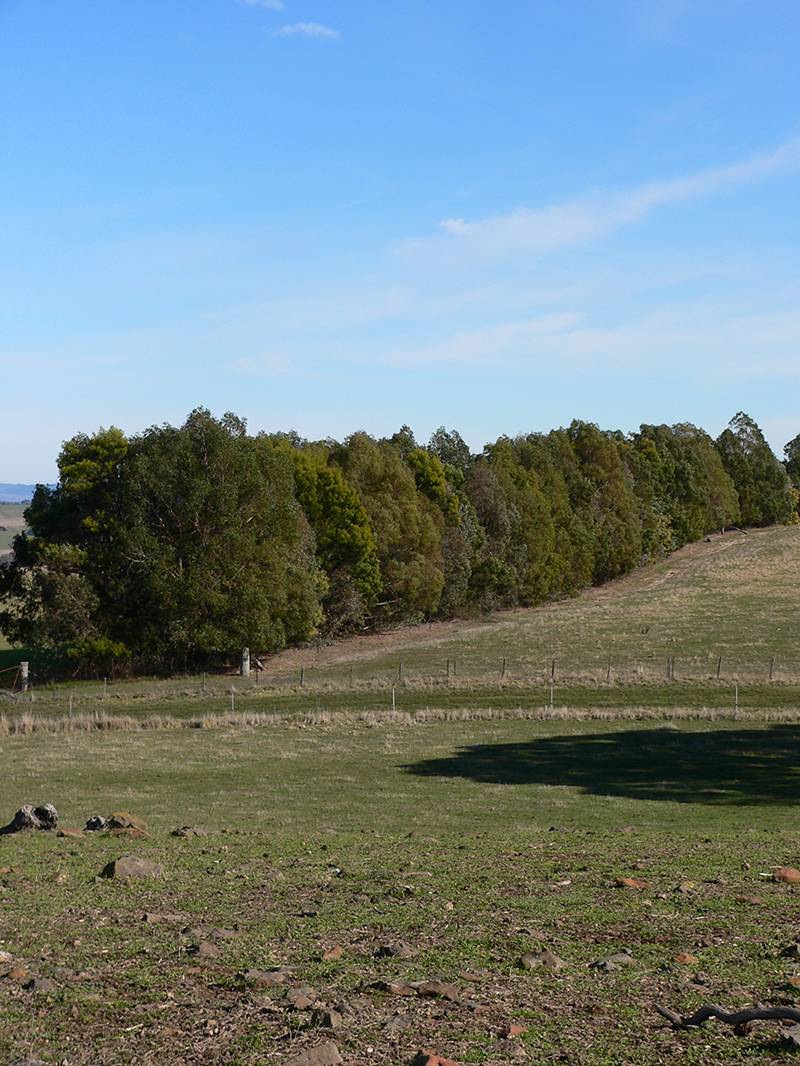 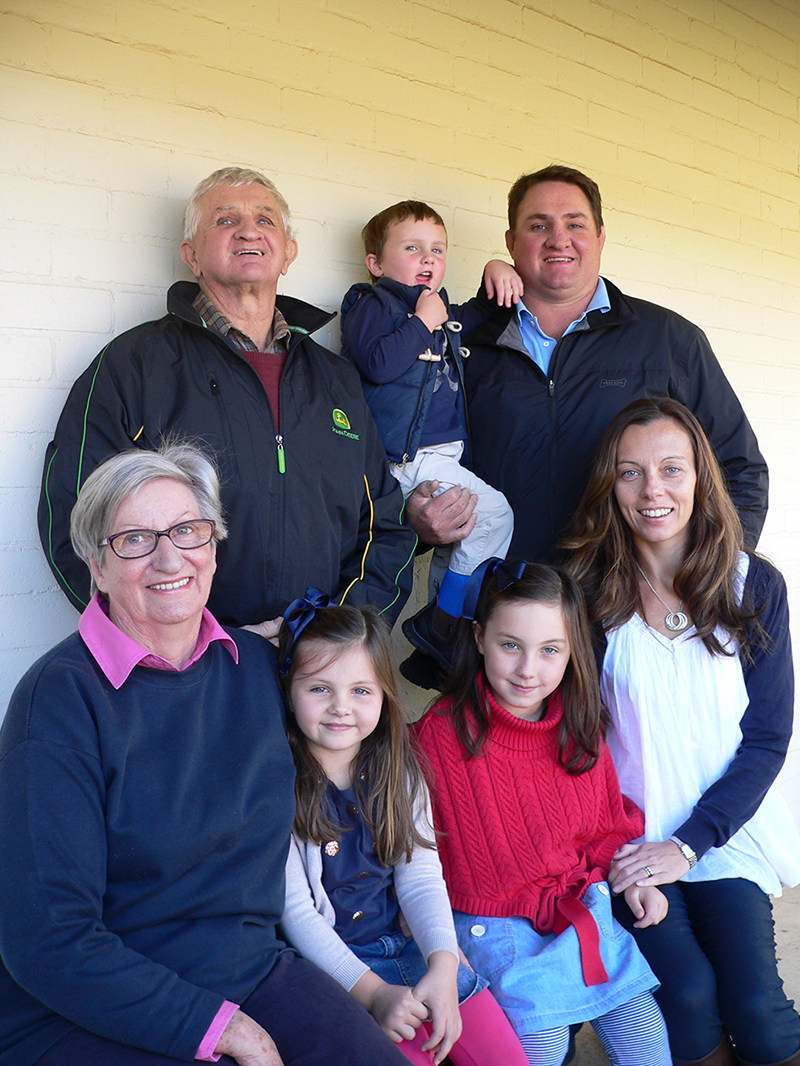 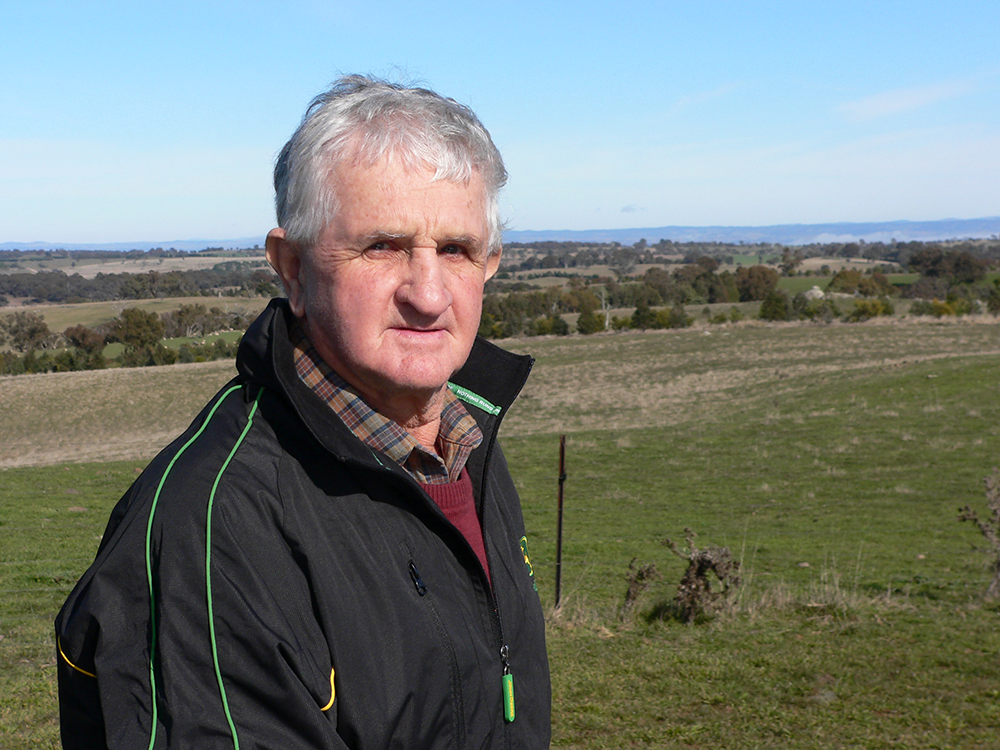 Invitation: Adventurous volunteering making a difference on the upper Murrumbidgee!