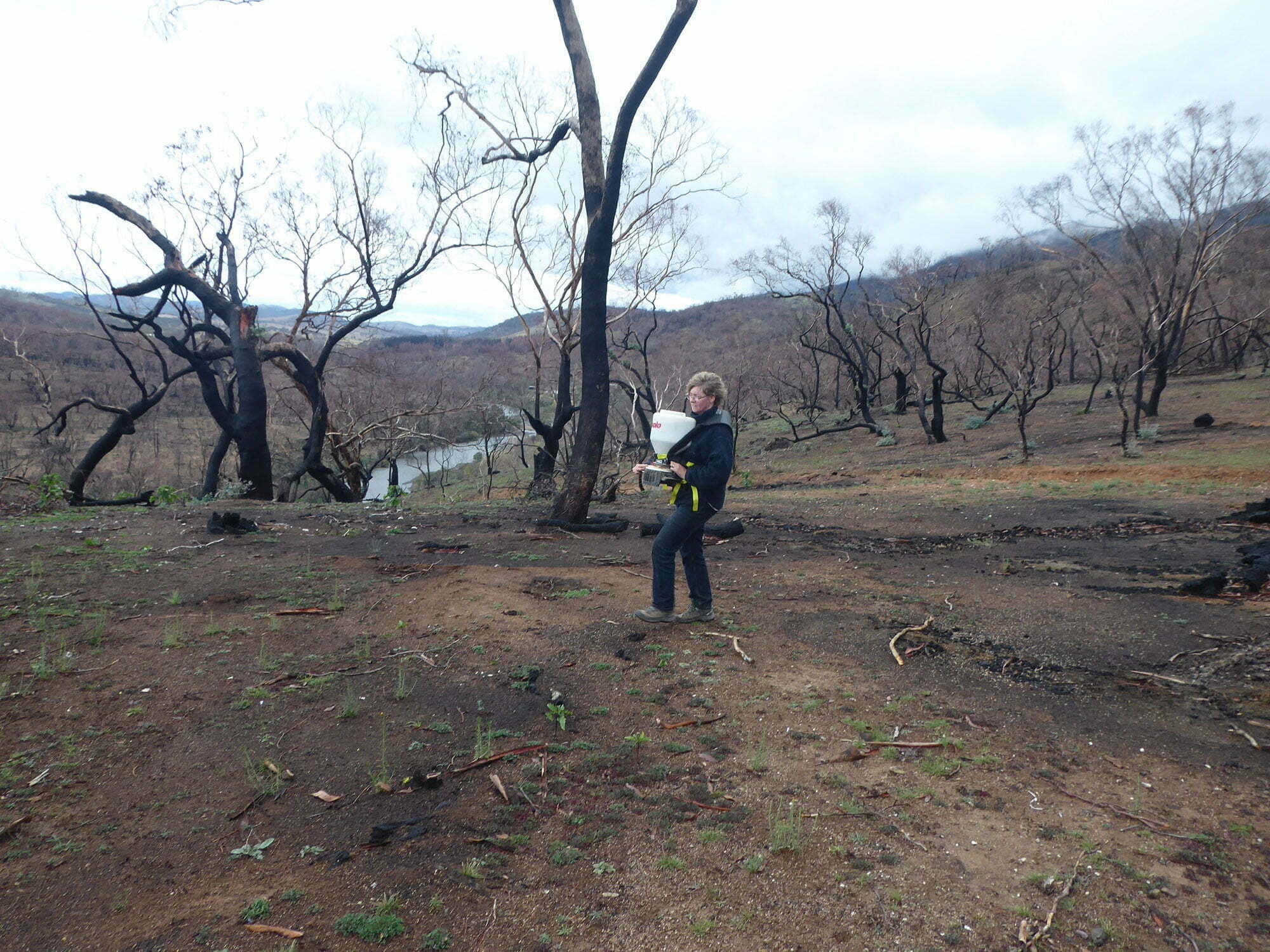 The 2019-2020 summer will not be forgotten in the near future! On that unlucky Saturday on the 1st Feb, 2020, the Clear Range and Orrorral fires spread rapidly to the south-east, bearing down on the Murrumbidgee River corridor. By mid-morning the two fires had combined to form an aggressive fire storm, which swirled down the steep and rugged hills to the Murrumbidgee River and through the Bumbalong Valley, with devastating impacts on many of the properties in that small tight knit community.

The fire impact in the Bumbalong Valley was severe- burning right down to the Murrumbidgee River. Months on, groundcover still has not recovered.

Post fire inspections of the fireground showed widespread crown scorch, (which is where the tops of the trees are scalded), as well as areas where the canopy was burnt altogether and the soil left completely bare,  The level of destruction showed the high intensity of the fire storm. The fire burnt right down to the Murrumbidgee River, and was particularly catastrophic at the northern and southern ends of the Bumbalong Valley.

Bare banks along the Murrumbidgee River.  These areas are a priority for seeding with Sterile ryecorn to protect water quality.

As bad as the impact of fire is on the day – the road to recovery is perhaps the more painful. Apart from the clean-up of destroyed property, landowners are also faced with significant changes to the environment around them. Fire impacts not only vegetation, but also changes the chemical nature of the soil, making it water repellent and increasing run-off which, as a consequence, increases erosion potential. Subsequent run-off from fires in turn greatly affects our waterways, as ash and sediment is washed down, impacting stream health for many kilometres downstream and, sadly, for years to come.

Hilltops where loose soil remains are a priority for seeding with Sterile ryecorn. In the background groundcover recovery can been seen.

In the Bumbalong Valley, there were several rainfall events which fell on the fireground shortly after the fire impacted. One of these events was a localised storm cell which occurred on Saturday the 15th of February, just a fortnight after the major fire storm.  This storm cell resulted in a massive amount of run-off from the fireground, carrying with it ash and sediment, and creating new erosion gullies. Huge amounts of sediment ended up in the Murrumbidgee River, smothering high quality fish habitat, and more is now sitting in the bottom of tributary gullies throughout the Bumbalong Valley. We are currently working with landholders and the NSW Soil Conservation Service at two properties which were heavily impacted by fire, and then erosion. Funding for works has been made available by Local Land Services and Landcare Australia to assist with remediation.

Three months on from the fire, at Justin and Lyn’s place, the ground still remains bare in many places, leaving the soil vulnerable to further erosion. Areas especially at risk include loose soils at the tops of hills or on hillslopes, soil which has been deposited in gullies, and bare banks alongside the river. One solution is to seed with Sterile ryecorn. Sterile ryecorn will not set seed, and so provides short term cover until other groundcovers can re-establish. It is a grass with an upright, non-clumping habit, which allows other plants to establish underneath it.

Sterile ryecorn is useful on steep slopes, in narrow gullies, and on shallow soils where it can be unfeasible or inadvisable to install other soil holding solutions such as widespread mulching or coir logs. Justin and Lyn and a group of helpful backpackers which have been staying in the Bumbalong Valley to assist with fire recovery have been seeding with Sterile ryecorn as a quick way to recover groundcover, focussing especially on areas where erosion could further impact on the Murrumbidgee River. 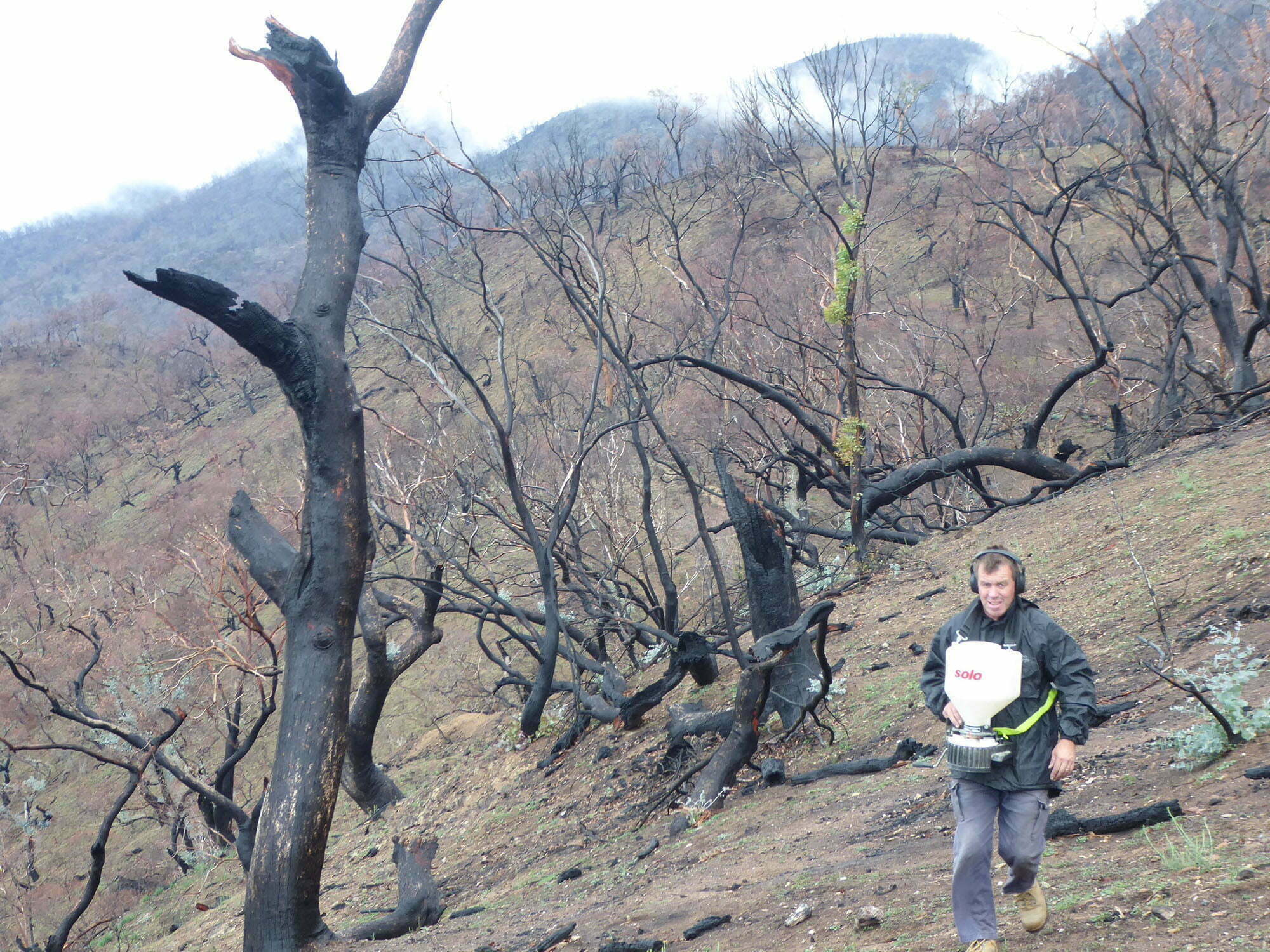 Justin (left) and Lyn (right) using the hand seeder with Sterile ryecorn seed. The steep terrain which was seeded can be seen in the background. 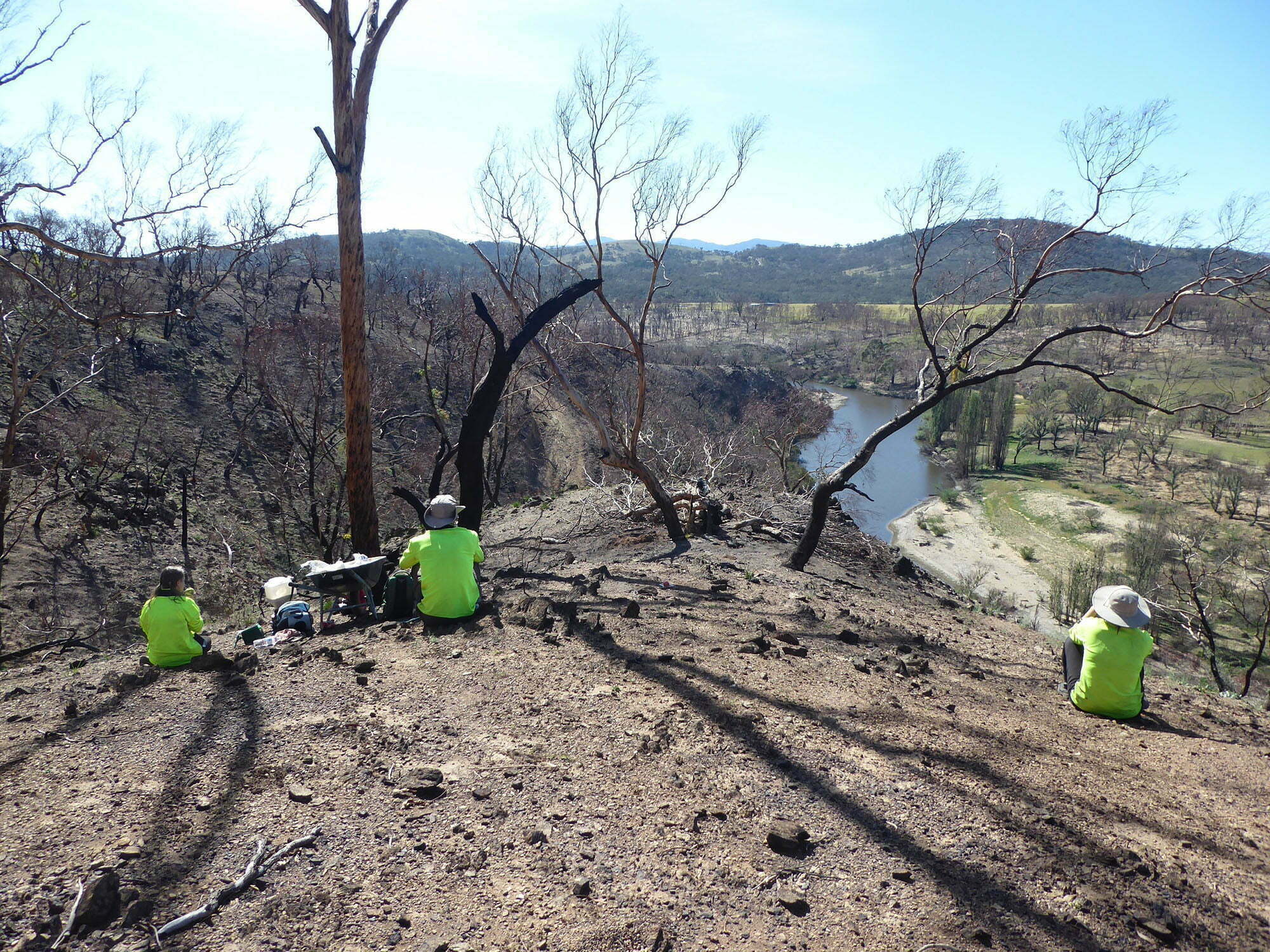 Backpackers taking a well-earned break from helping to spread seed at Justin and Lyn’s.

On Justin and Lyn’s property several new erosion gullies had also formed, with deep erosion nickpoints and scouring on the alluvial terrace flanking the Murrumbidgee River corridor. One double armed gully is associated with drainage along an access track, and it was scoured out in the rain event after the fire as the stabilising vegetation in the drainage line was burnt. Site visits with staff from the NSW Soil Conservation Service to assess remediation options identified that redirecting the drainage from the track away from the main gully areas would assist to arrest further erosion. This was the most feasible option, as accessing the erosion gully itself is difficult due to terrain. Native planting will also assist to stabilise deeper soils flanking the drainage line close to the river.

Steep areas such as in this photo are best seeded as widespread mulching or installation of coir logs would be difficult. 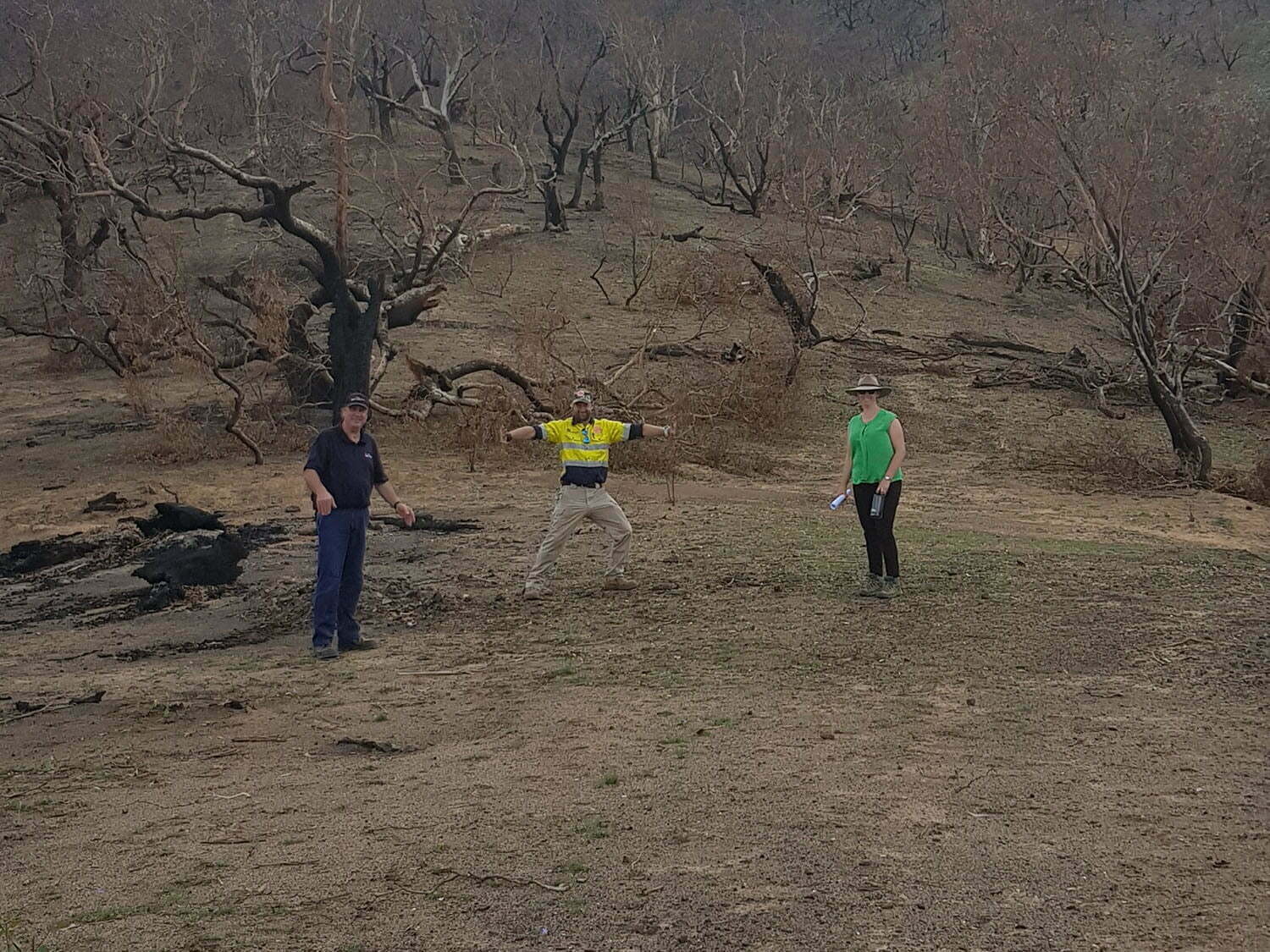 The access track at the Sebo’s was badly eroded, channelling water and causing a new gully after the post-fire rain events.

Above and below photos show erosion scour caused by drainage off the access track.

At the southern end of their property, the lower section of a large gully was also badly scoured out where the force of the water dropped over a road crossing. The erosion has formed multiple channels, each with its own nickpoints in the bed of the gully. This area will be reshaped to restore the original channel with a more even gradient, smoothing out the erosion nick points which have now been scoured into the bed. The bed and banks will then be stabilised with jute matting, coir logs and planting. Rock armouring of the channel base will be added if required.

Lyn, Justin and Ashley Bolton from the NSW Soil Conservation Service inspecting ascoured out gully floor at the southern end of the property. 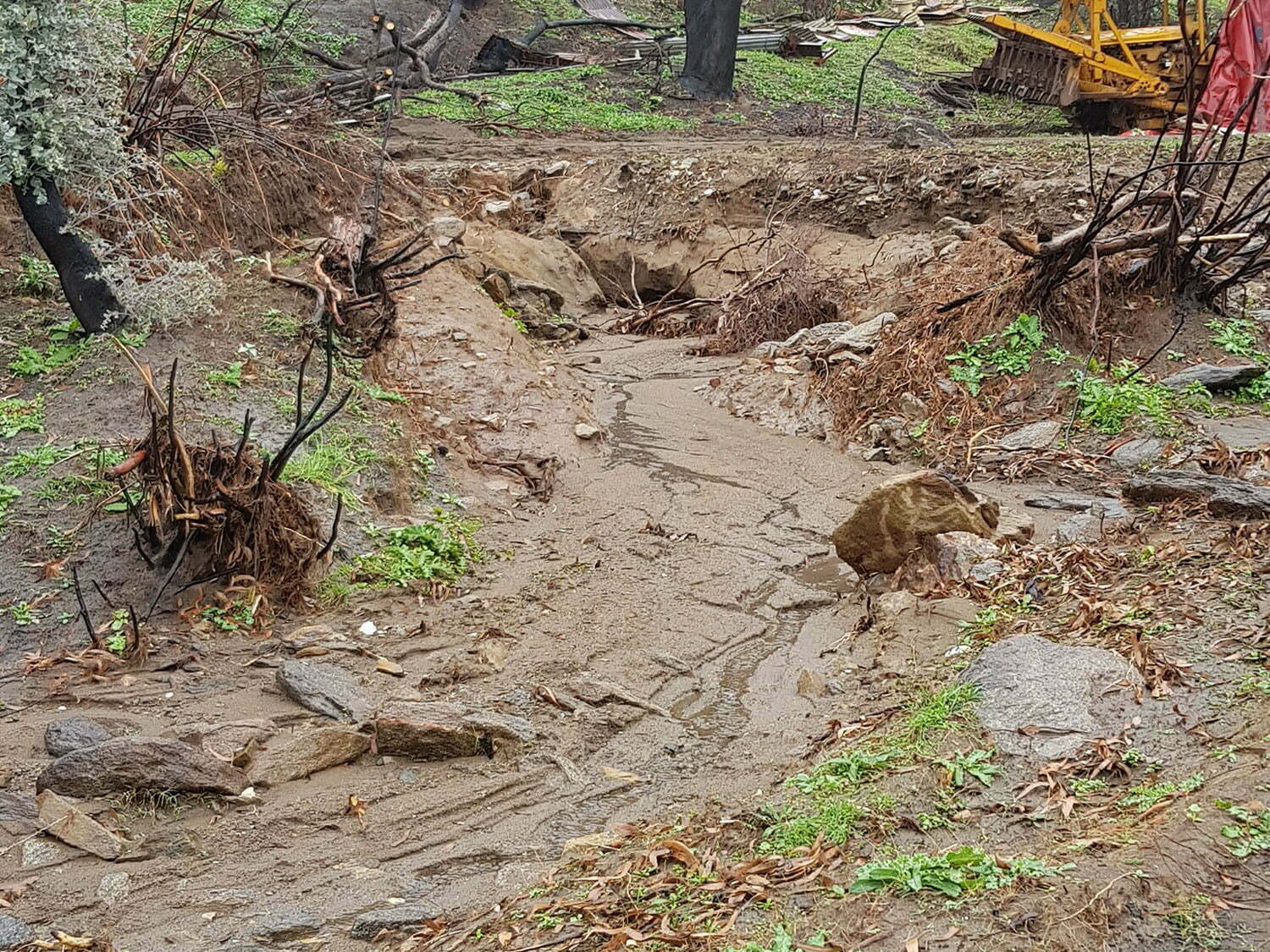 The secondary overflow channel scoured out during the rain event which occurred post fire.

“We were at a very low point after the fire and flood devastated the landscape and changed it beyond recognition. The situation felt hopeless and we had no idea how we were going to help repair the landscape. At a time when we really needed help, it was a blessing to receive the support of Antia from the Upper Murrumbidgee Demonstration Reach who rallied the support of Ashley and Kurt from NSW SoilCon, and Andy and Felicity from Local Land Services. Their skill, experience and empathy in working through a solution has been uplifting.”

At Paul and Sue Way’s property, the fire burnt right to the river, burning out woody debris that was part of the erosion revetment our Rivers of Carbon project had previously installed to arrest bank slumping along the Murrumbidgee River.  On their northern boundary, where once a mere creek bed assisted with a gentle flow of water into the Murrumbidgee River, Paul and Sue have now been presented with a large gully where the sediment has badly scoured the environment.  This small creek bed is now wide enough for a four- lane freeway. 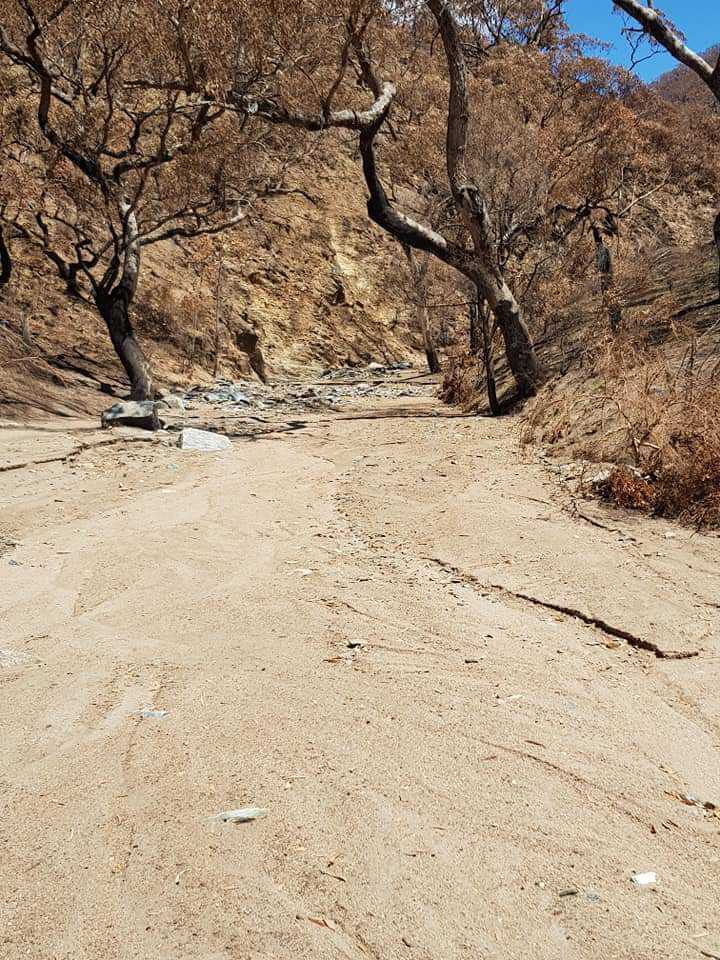 The force of the flood, with huge amounts of sediment and large boulders (some ten feet in diameter) in the Murrumbidgee, has now created several sediment islands in the River where once the river flowed.  In addition, there has been further erosion on an area where the Rivers of Carbon program assisted to build various river bank erosion revetments and snags for fish habitat, whicht incorporated large woody debris jutting out from the bank. This bank is now left vulnerable to future erosion. 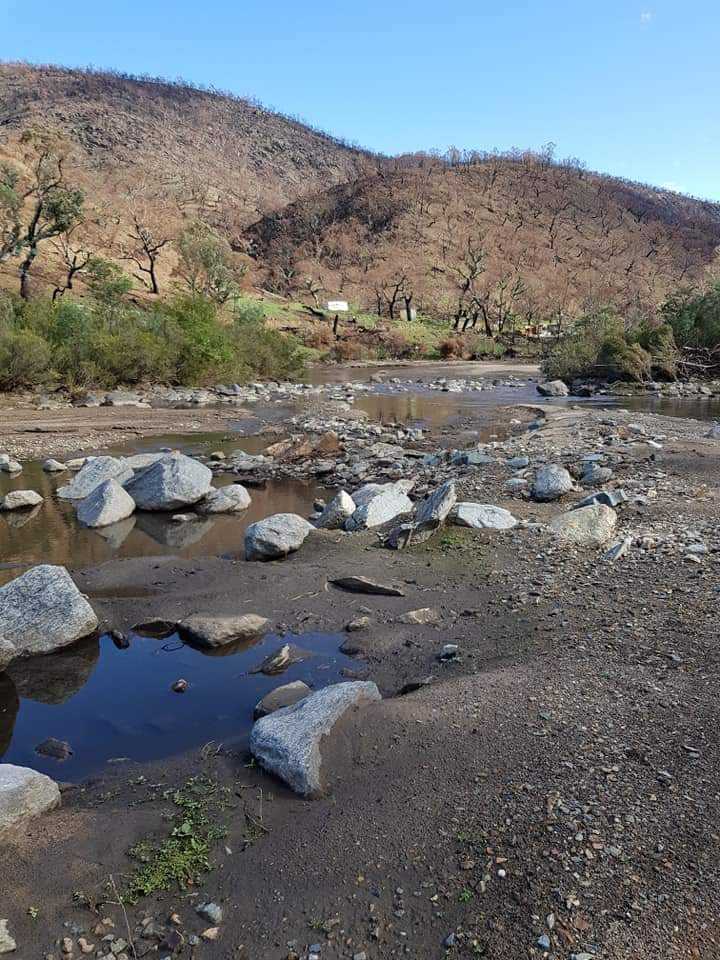 Paul and Sue are grateful that the Landcare Australia Bushfire Grant we have been able to secure will provide the funding needed for re-installing the revetment and snags after the fire impact.  The works will involve establishing groundcover that burnt away on the sloping riverbank by seeding with Sterile ryecorn to provide immediate groundcover and then rebuilding the bank stabilisation works. We will drive in steel posts to anchor the woody debris and snags that will be positioned in front of the bank. The woody debris will be salvaged from fire clean up and environmental repair that is being conducted around the property.

The fire burnt right down to the Murrumbidgee River. Photo: Sue and Paul Way.

Antia and Paul seeing what can be done on the riverbank. Photo Sue Way

There is widespread agreement in the Bumbalong community that the scale and severity of this year’s bushfires is beyond what we have ever seen. The impacts on our river systems is just one example of how these impacts are very widespread and will have a lasting effect on our landscape and community, perhaps even changing our environment for the foreseeable future. The extent of the recovery work that now needs to be undertaken is not possible unless we all work together and are supported by the right expertise and adequate resourcing.

The community of Bumbalong have certainly shown how they have pulled together and supported each other to begin the slow road to recovery. The Upper Murrumbidgee Demonstration Reach partnership, through the Rivers of Carbon program, is glad to be able to assist landholders in the Bumbalong Valley to remediate the landscape and protect the Murrumbidgee river after such a horrific bushfire season.  A big thank you goes to our amazing landholders, and the vital support we have recieved from South East Local Land Services, through funding from the Australian Government’s Wildlife and Habitat Bushfire Recovery Program to assist with remediation. 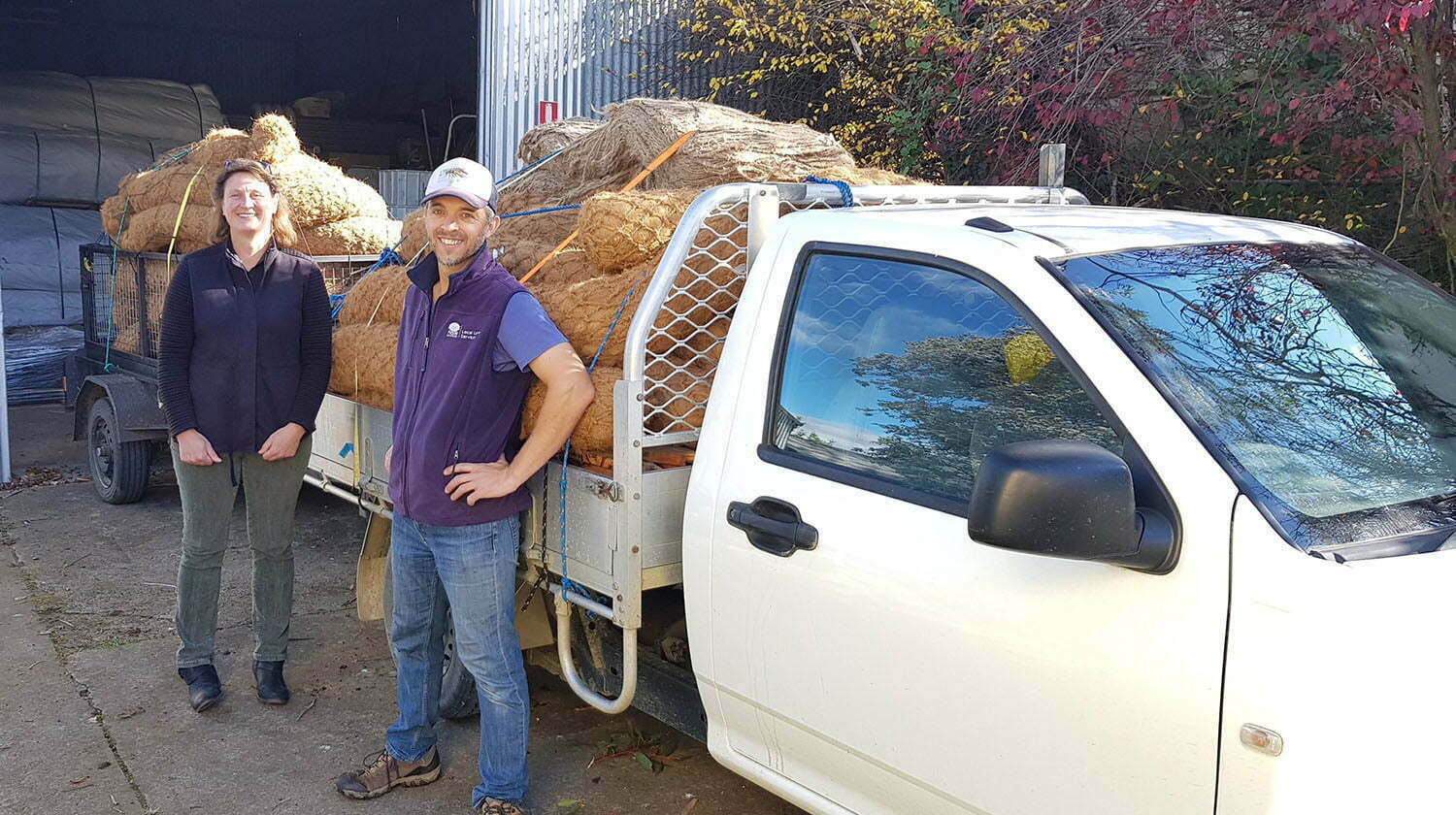 Andy Taylor and George Story from Local Landcare Services with loads of coir logs ready to go to Bumbalong.

Unless otherwise stated, the photos are taken by Antia Brademann. 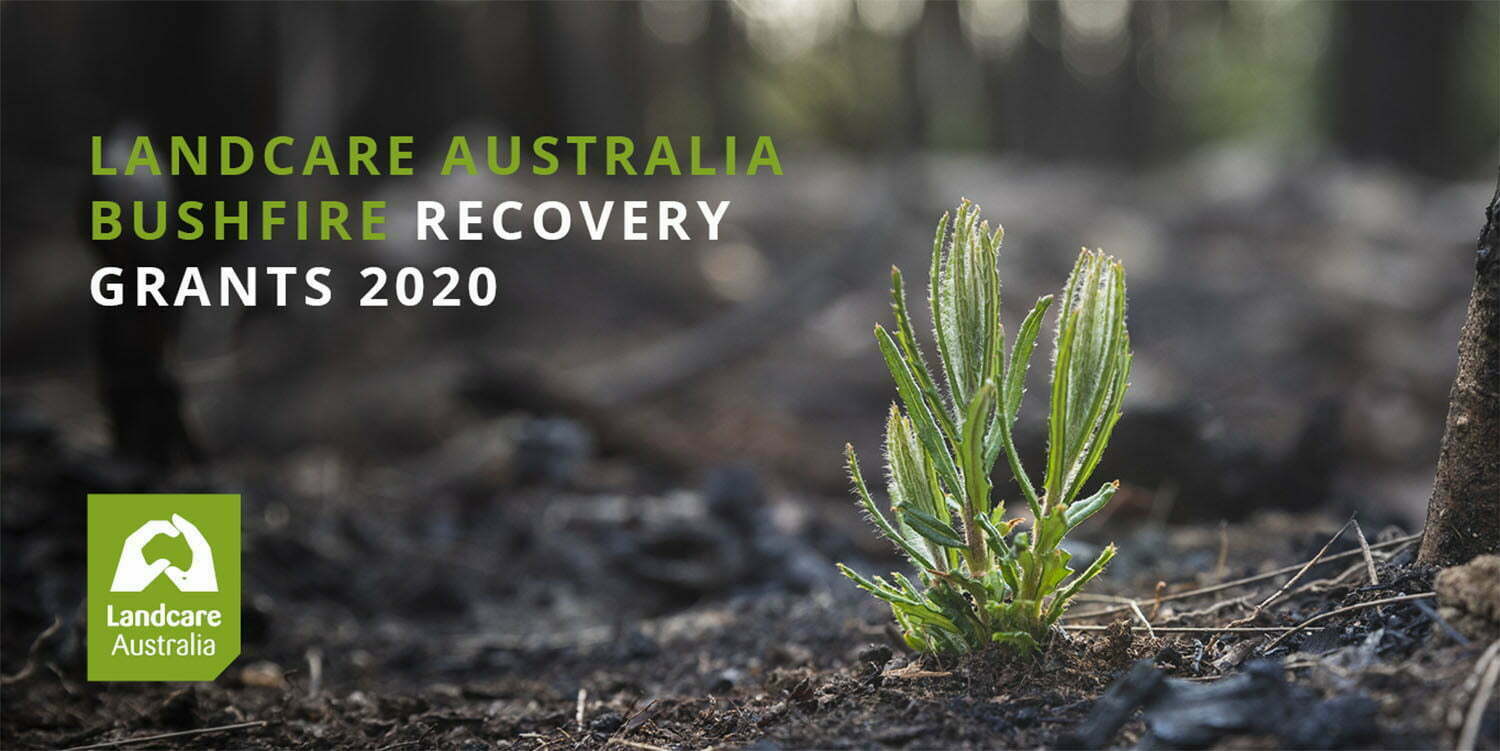 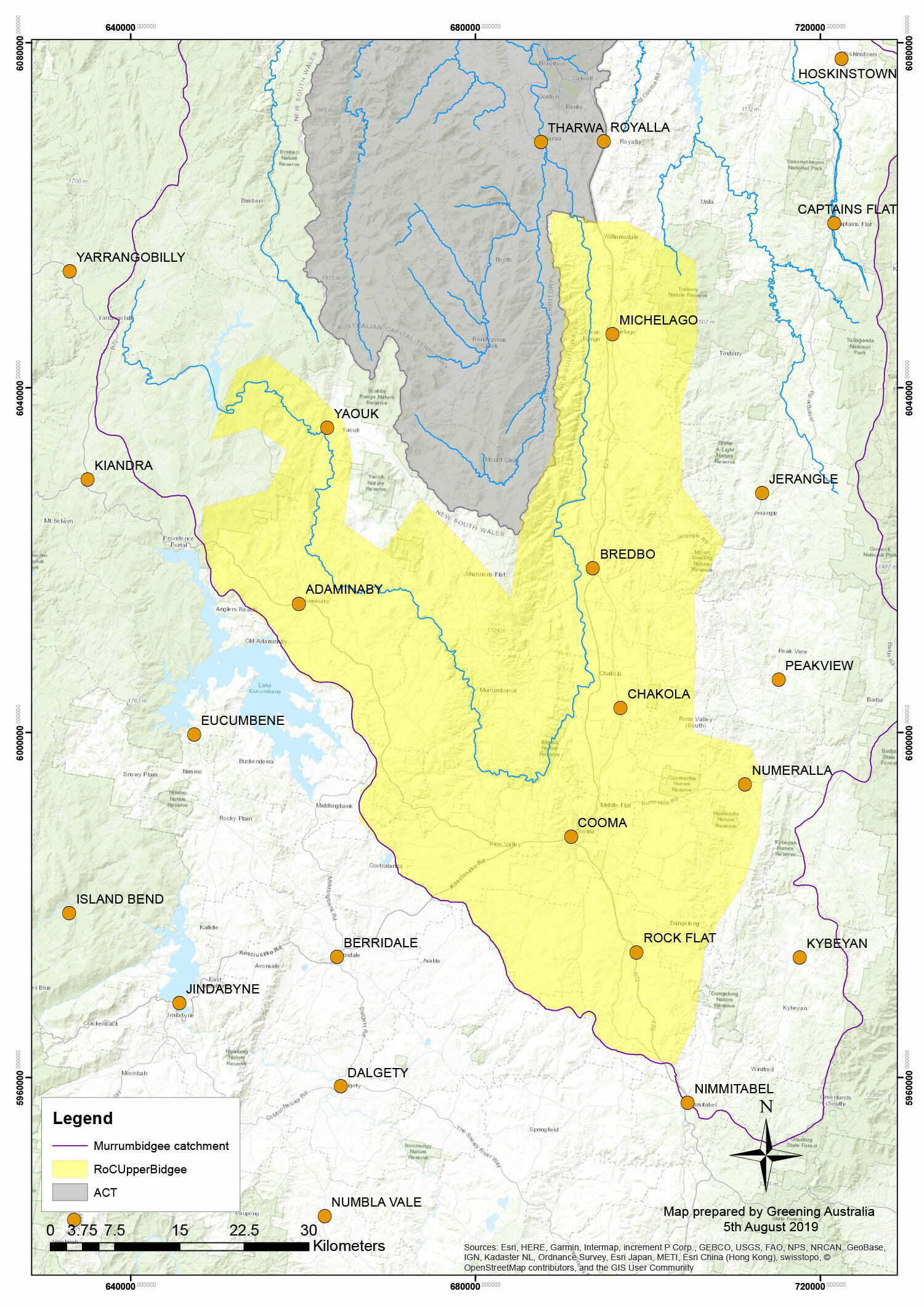 The Upper Murrumbidgee River is a special place, with rich biodiversity, cultural heritage and communities keen to protect and restore the social and environmental assets the region contains. Our projects in this stretch of river are varied, and include adventurous volunteering, fish habitat creation, riparian revegetation, erosion control and community engagement. Our overarching focus is on connecting riparian habitat along the river as it has been historically cleared, and heavily impacted by erosion and large amounts of sand deposition.