All too often, administrators in government and industry push for ‘biodiversity offsets’ – clearing a forest patch in one area for development, while reforesting a degraded patch in another area. The problem is, we cannot simply replace primary forests and hope to maintain biodiversity, long-term carbon storage and resilience. You can’t recreate a perfectly functioning, resilient native forest.

A paper published in early December 2014 entitled “Does forest continuity enhance the resilience of trees to environmental change?” by von Oheimb and colleagues clearly shows that German oak forests that had been untouched for over 100 years were more resilient to climate variation than forests planted more recently.  Researchers found that although forests planted on former farm land had higher growth rates than continuously existing forests, the variation in growth was much higher in afforested areas. That is, bad conditions had much greater and much faster impacts on the afforested areas. Fig. 1 shows this. 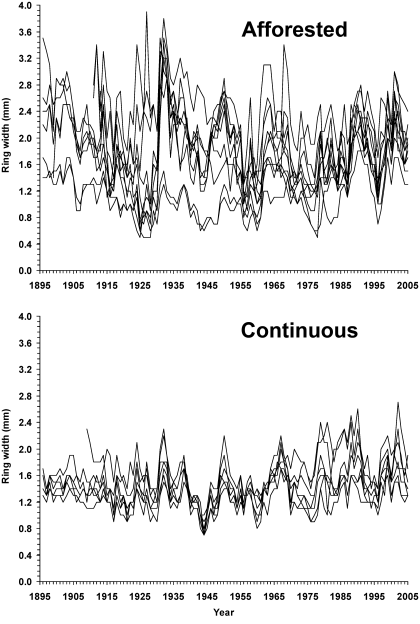 Additionally, the paper discussed the difference in vital ecosystem functions,such as nutrient cycling and biodiversity,  in continuously existing forests and afforestations. These findings demonstrate that keeping primary forests is a far better way of ensuring long-term resilience and biodiversity than attempting reforestation and restoration that doesn’t always work.

This isn’t to say that we shouldn’t reforest what we’ve already cut down. Indeed, if there isn’t a global commitment to reforestation, the extinction crisis will continue to become out of control. However, reforestation and afforestation doesn’t solve deforestation and replace the loss of biodiversity. Therefore, we must protect all remaining primary forests, while reforesting the vast areas of deforested lands in the world.

Article adapted from ConservationBytes: It’s all about the variation, stupid and PLOS ONE paper: Does forest continuity enhance the resilience of trees to environmental change?.

Fig. 1 from ConservationBytes: It’s all about the variation, stupid. Image of Australian native forest in Victoria from google images vicrainforest.org

“Most species of willow are Weeds of National Significance. They are among…