Sustainable production and environmental responsibility are priorities for investment company MH Premium Farms, who own Suffolk Vale and Springfield, a prime lamb operation at Boorowa, NSW. 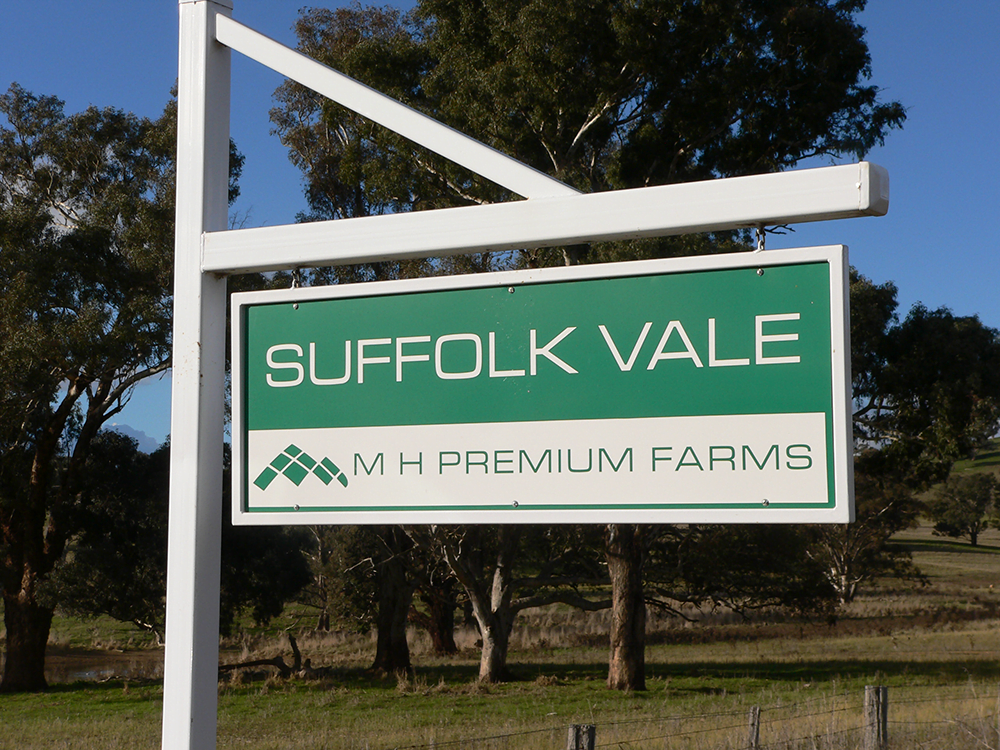 As part of the Rivers of Carbon project, a five kilometre stretch of the Boorowa River which runs through Suffolk Vale has been fenced off and will be revegetated.

According to farm manager Allan Munns, MH Premium Farms decided to become involved in the new Rivers of Carbon project because they felt they had a responsibility to be proactive about managing the environment and protecting their on-farm resources. A five kilometre stretch of the Boorowa River runs through Suffolk Vale. Speaking about the project Allan said:

“It also fits with our production goals of reducing labour costs and improving stock management. Fencing off creeks and riparian areas has provided significant cost savings in running our farms.

The stock losses were time consuming and these days you don’t have the labour to be always fixing flood gates or getting stock back from neighbouring properties or across the river.”

“The Rivers of Carbon project provided the incentive and the company was more than happy to get right into it.” 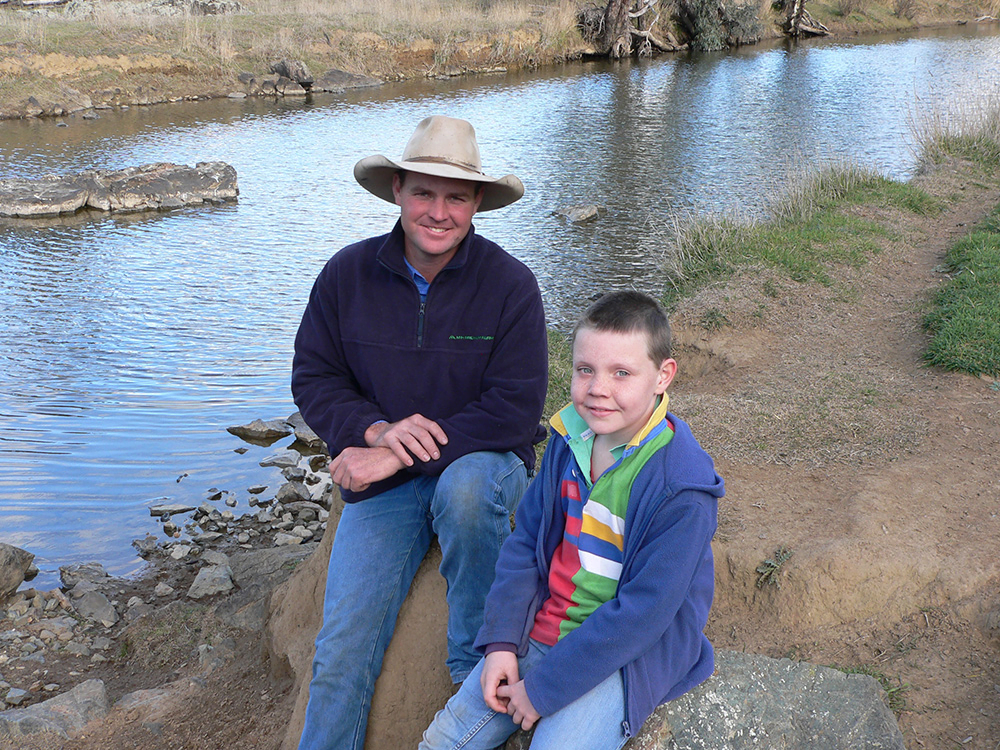 MH Premium Farms manager Allan Munns and his son Fergus on the banks of the Boorowa River at Suffolk Vale, Boorowa, NSW. According to Allan, the company decided to get involved in the Rivers of Carbon project to better manage the environment and improve their production goals.

Suffolk Vale and Springfield total 5043 hectares and run a commercial sheep breeding operation comprising 10,000 composite breeding ewes along with a herd of 650 Angus and Hereford cross cattle. They aim to finish off about 12,000 prime lambs per year.

The pasture is a mix of native perennial grass species including Bothriocloa (Red Grass), Microlaeana (Weeping Grass) and Stipa sp (Spear Grass), and improved perennial pastures such as Phalaris, Cocksfoot, Sub Clovers and Lucerne. This area is also home to a range of significant bird species including the Superb Parrot.

Involvement in the Rivers of Carbon project builds on earlier work completed at Springfield, where a two kilometre stretch of the Pudman Creek was fenced off and revegetated. The Pudman Creek is home to the endangered native fish species, the Southern Pygmy Perch.

At Suffolk Vale, the riparian area fenced off covers the entire 5km (50ha) section along the Boorowa River which is a permanent water source. Local fencing contractors completed the fencing in 2013. Materials were funded through Rivers of Carbon and the landholder provided the labour. This included fencing, off- river watering for stock and tubestock.

“The river corridor has been fenced wide enough to prevent the fence being lost if the river floods, we have also fenced it according to the contours of the land which will provide areas where we’ll carry out some revegetation,” Allan said.

“There is also enough remnant riparian vegetation existing in patches along the river which will enable natural regeneration of reeds, shrubs, grasses and trees,” he said. 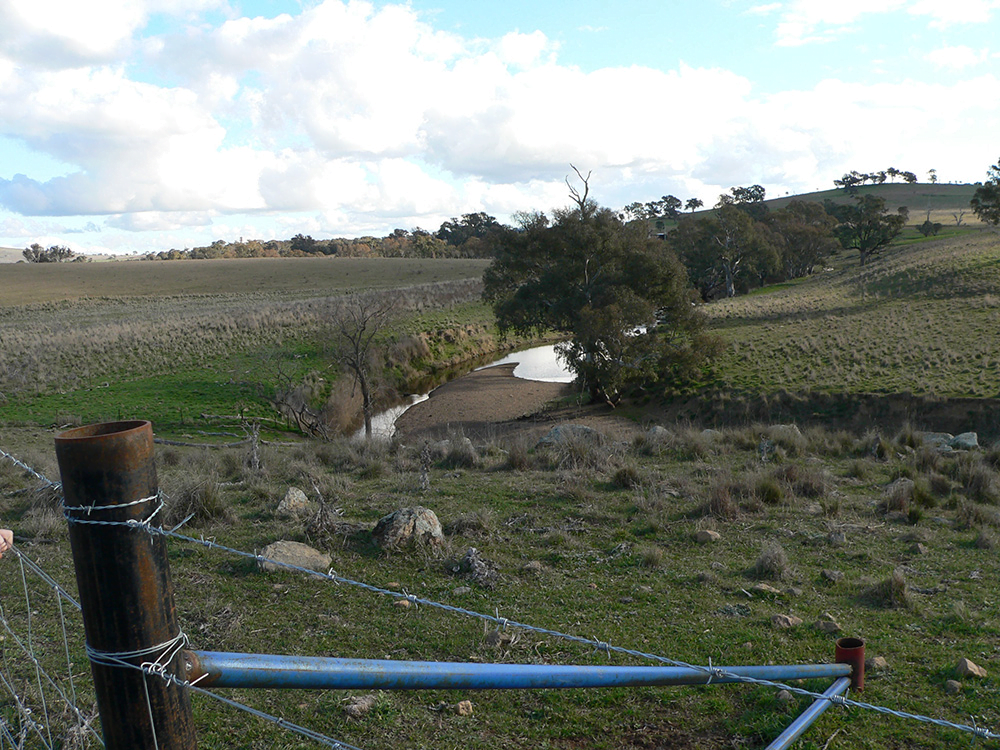 At Springfield, a ‘shotgun’ mix of native species was used to revegetate the riparian areas and only the River Red Gums survived so the revegetation at Suffolk Vale will be more tailored.

Some of the proposed tree species include River Red Gums (Eucalyptus camaldulensis), Yellow Box (E. melliodora), Blakely’s Red Gum (E. blakelyi) and Apple Box, along with several different varieties of Acacias, Bottlebrushes and Tea-Trees, all of which are found in the local areas. Managing ground cover will also be a priority to assist with regeneration of native grasses to reduce erosion.

“We want to focus on improving the water quality, so we need to get the ground cover and trees established, this will stabilise the banks and encourage regeneration, but now that it has been fenced off, I think a lot of natural regeneration will happen anyway,” he said.

The project provides alternative water sources for livestock and troughs are currently being installed along with another 3.5km of poly pipe to access the river water. Three dams will also be dug this year with a further three to be completed during the next year. According to Allan, the mix of troughs and dams will provide sufficient water for livestock.

“We have a combination of bore water and surface water, so the additional water sources will fit with the system Suffolk Vale has in place already.

“We are installing the water troughs on the paddock ridges away from the river which will encourage the sheep to graze the paddocks more evenly and not put so much pressure on lower lying areas of the paddocks nearer to the river,” Allan said.

Some of the fences have been placed so they can be used as laneways to allow access to the sheep and cattle yards.

Ongoing management of the project site will include crack willow control and strategic crash grazing to manage fire fuel and enhance biodiversity. Site monitoring will be carried out by Greening Australia using photo points and the Rapid Assessment of Riparian Condition tool.

Across our rural landscapes, paddock trees stand out as an iconic image,…

Get some carp on your cutlery! Check out our new Carping at Christmas film!

Are people willing to pay for the co-benefits of carbon farming like biodiversity, vegetation and wellbeing? Find out…